Shawty Lo defends All My Babies’ Mamas. He says selling drugs and money-hungry women resulted in 11 kids by 10 different women — and it isn’t his fault. 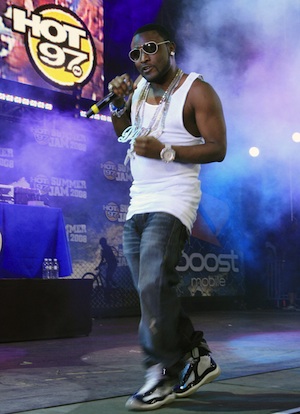 All My Babies’ Mamas star Shawty Lo defends his 11 kids by 10 different women and his new Oxygen reality television show. In case you haven’t heard, All My Babies’ Mamas is an actual reality show that focuses on the inherent drama of being Shawty Lo: living in a house with 10 women who are all Lo’s “baby mamas” — a term used to describe the relationship between a man and a woman who have a child together but are no longer romantically involved. Lo has 11 children by 10 baby mamas, in addition to a 19-year-old girlfriend whom all the baby mamas seem to dislike, at least according to the show’s preview.

Shawty Lo defends All My Babies’ Mamas and spoke exclusively to MTV News about his upcoming reality show. “You can hate all you want to, I didn’t ask for it. It just happened. Now that it happened, I’m supposed to turn my back against it?” he said. “If I wasn’t taking care of my kids then you would really dog me out, but I’m taking care of my kids, providing for my family. I don’t know what else to say.” (Note: The website Celebrity Net Worth states Shawty Lo’s net worth is likely around the $2 million range, although we cannot verify Celebrity Net Worth’s sources or calculations.)

The controversy surrounding All My Babies’ Mamas isn’t from Shawty Lo skipping out on his fatherly responsibilities. The issue many people have with the show is that Shawty Lo and all his babies’ mamas seem so undisturbed by the potentially dysfunctional and perhaps even reckless disregard for child and family development. We applaud Shawty Lo for providing the means for his family to survive and live financially well, but he misses the point. All My Babies’ Mamas showcases petty drama and an indifference to commitment and stability — while attempting to glamorize having 11 kids by 10 different women — all because Shawty Lo is a local celebrity.

Shawty Lo’s baby mama situation might be a product of his rough childhood. In remembering his youth, he says, “I came to be one of the largest drug dealers to come from Atlanta, Bankhead area and I started havin’ kids. When the money came, a lot of women came,” said Shawty Lo. “Once you feel like a girl was your girlfriend or whatever, the rubber probably came off.” He continued, “They wouldn’t have an abortion. They used to take the money and run with it, and they’d have a baby by the most popular guy in the street, and that’s how I had all them kids.”

You can watch the full preview for All My Babies’ Mamas starring Shawty Lo below.