“Skinnygirl” mogul Bethenny Frankel appeared on The Ellen DeGeneres Show to talk about the elephant in the room. Yep, the divorce. 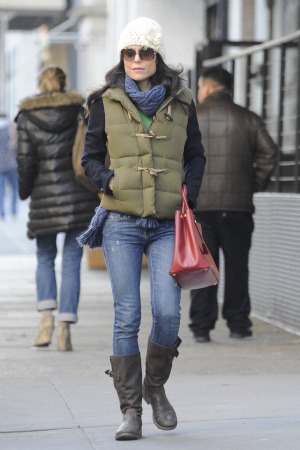 All eyes have been on Bethenny Frankel since she announced her separation from her husband, Jason Hoppy, on Dec. 23 and then filed for divorce on Jan. 5. Now, she’s opening up to her broadcast mentor, Ellen DeGeneres.

On Wednesday’s The Ellen DeGeneres Show, the Skinnygirl mogul appeared with the talk show host to discuss the recent demise of her marriage.

She told DeGeneres, “I feel like a failure. I really put it out there — I wanted the fairytale, I thought I had it. And [my daughter] Bryn is my fairytale… but I don’t know how people go through [divorce] because this is excruciating.”

Frankel has been very open about the problems in her marriage and it doesn’t seem like she is stopping now, especially with her new talk show set to debut in the fall. The 42-year-old also seems to understand that many of her fans have taken clear sides.

The reality star said, “I get letters. So many people have been so supportive and some people are judgmental. And I really understand.”

Even with her underlying strength, the former Bethenny Ever After star knows that the challenges that lie ahead aren’t easy. “I’m scared of the unknown future. You know everything, and one day you don’t know. So I’m scared. I’m older.”

The Bravo TV personality continued, “I never thought I’d be a role model but I think to some people I am or have been. So this is an important time because it’s about what I do next. How I handle myself now with grace, with dignity. This is the time now that matters.”

Hopefully, the divorce won’t be fought out publicly, but there are reports that Hoppy was blindsided by Frankel’s request for sole custody, child support and health insurance in the divorce filing.

Either way, she seems to have a strong ally with DeGeneres in her corner and she has a relatable story to share with her viewers when her talk show debuts next September.