Chaos ensues as bad guys take hostages, a card shark scams the Savoy, an unlikely duo team up to expose Rizzo and the Tumbleweed comes under new ownership. Just another day in the wild town of Vegas. 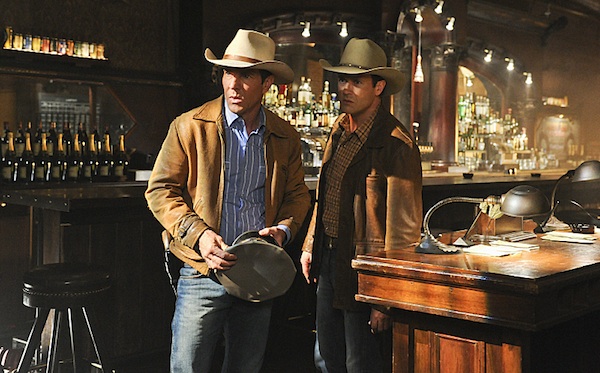 There’s one major surprise in this week’s episode of Vegas. Ralph Lamb (Dennis Quaid) got kidnapped! I don’t even know how that could happen. He’s like the John Wayne Superman of the desert. He brings convicts to their knees with his death stare and is always ten steps ahead of the meager criminals who surround him. He’s not supposed to get kidnapped!

Ralph finds himself six-feet under ground with piles of dirt being shoved on top of him — and no idea who’s to blame. Fifty-eight hours earlier there was just chaos in Vegas. There was a group of murderous brothers seeking revenge for their father’s financial demise and death. They were taking hostages all over town and when the Lamb men went to straighten things out, Ralph actually killed one of the brothers.

It would make sense that the surviving brother was the kidnapper, but as Ralph tears open the ropes that confine him and manages to climb to the top of the grave he discovers the truth: The kidnapper is a card shark from Providence who’s been scamming the Savoy. Ralph’s in the middle of fighting the kidnapper when Jack (Jason O’Mara) arrives and shoots the guy. Even superheroes need sidekicks.

Mob Boss wife, Laura Savino (Vinessa Shaw), has officially joined forces with ADA Katherine O’Connell (Carrie-Anne Moss) as a confidential informant. She’s trying to gather all the evidence she can to prove hot-head Johnny Rizzo (Michael Wiseman) murdered his finacée. This, of course, is self-serving because with Rizzo out of the way Laura’s husband can regain his position at the top of the food chain in Vegas.

Laura was able to get Vincent (Michael Chiklis) to say that Rizzo was probably guilty and that was enough for Katherine to get permission to tap the phones at the Savoy. She may be well-intentioned and it all may work out for him in the end, but I can’t imagine Vincent being too happy when he discovers the truth.

Things You Should Know

Jack and Mia (Sarah Jones) have finally sealed the deal! The exceptionally beautiful couple showed up a little late to work after walking up in Mia’s lavish bed. This will definitely spark some trouble in the Rizzo and Lamb households!

Also, Vincent Savino and Johnny Rizzo were held hostage by a band of desert vigilantes who are trying to clean up Vegas (this is apparently based on legendary Mormon vigilante groups… interesting ). To get out of the fix, Rizzo actually signs away the Tumbleweed to them. And there goes Vincent’s dream of being the biggest casino owner in the desert. Until he plots another scheme, that is.