Teen Mom star Farrah Abraham has been criticized far and wide for grooming the brows of her three-year-old daughter, Sophia. She tells Good Morning America that she didn’t use hot wax, and she was trying to help her young daughter. 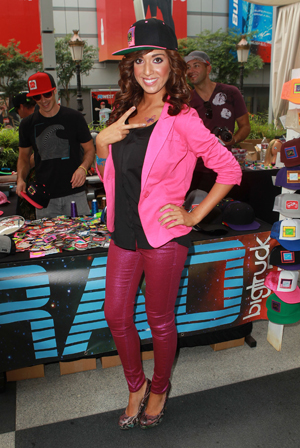 Watch out, Sophia! Here comes Mommy with the tweezers!

Teen Mom’s Farrah Abraham, 20, deflected criticism on her parenting methods on Wednesday’s Good Morning America, claiming her decision to groom her 3-year-old was to prevent her being bullied.

“People just kept commenting on a unibrow and I said, maybe I am letting it go too far,” said Abraham.

Who are these “people” who are “commenting” on the appearance of your 3-year-old daughter? Here’s a tip: Anyone who has something negative to say about the appearance of a small child (other than, “Let’s get that ketchup off your face,”) is a cretin who should be wiped from any forthcoming guest lists.

Nonetheless, Abraham took the criticism to heart and decided that rather than tell the mouthier people in her life to suck it and appreciating her daughter’s natural appearance, she would groom her preschooler’s eyebrows instead.

Abraham wrote on her blog that she “tryed [sic] to wax” Sophia, but the small child dabbed at the wax when it was on her forehead and the hair removal project didn’t work. So she waited until Sophia was asleep and then did some pruning work with the tweezers.

Really, she sleeps that soundly? Wow.

“What I had said was, ‘Mommy’s going to try to pluck your eyebrows because there’s a little bit too much hair there,'” Abraham told Good Morning America. “If I can help my daughter in a little way by just plucking a few hairs, I think I did something right.”

“Reprehensible,” said GMA host Josh Elliott in response, after dermatologist Doris Day said that 3-year-old skin is sensitive and delicate, and that plucking shouldn’t begin until age 7 or 8 at the earliest.