Katherine Webb says the media’s reaction to Brent Musburger’s obvious lust for her while commentating a college football game is a complete overreaction, and more than anything she is flattered by his comments. 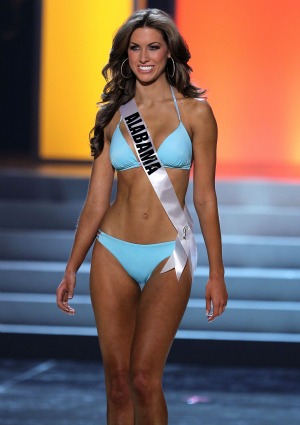 Miss Alabama USA Katherine Webb became the focus of a national spotlight on Monday when ESPN commentator Brent Musburger waxed not-so-poetically about the beauty’s physical attributes. ESPN issued an apology, but the beauty queen says not only is that totally unnecessary, but Musburger got the shaft and she’s totally flattered by his words.

“I think the media has been really unfair to [Brent Musburger],” Webb told Matt Lauer on the TODAY Show. “I think that if he would’ve said something along the line of we were ‘hot’ or ‘sexy’ or made any derogatory statements like that, that would’ve been a little bit different. But the fact that he said we were beautiful and gorgeous, I don’t see why any woman wouldn’t be flattered by that… I don’t take any offense to it at all.”

“I don’t think [ESPN’s apology] was needed, honestly,” she added. “Of course, I appreciate it, but at the same time I don’t think that I needed an apology.”

“I think that we need to draw back our attention to who the real winners are, and that’s the Alabama football team,” she added.

Webb may also appreciate the comments made by Musburger because he pretty much kick-started her career. Her Twitter count surged past that of her Alabama football player boyfriend AJ McCarron by the end of the game, and after seeing her 100,000-plus new followers Donald Trump announced he wants her to be a judge at the next Miss USA Pageant.

“We are going to ask Katherine Webb to be a judge at the Miss USA Pageant coming up in Las Vegas,” he tweeted.

“Miss Alabama, Katherine Webb, has been a truly great representative of the Ms. USA Organization… We are proud of her. What a great couple… Katherine Webb and AJ McCarron. They are both winners.”

As for that apology, it was nice anyway. ESPN released a statement saying, “We always try to capture interesting storylines and the relationship between an Auburn grad who is Miss Alabama and the current Alabama quarterback certainly met that test.”

“However, we apologize that the commentary in this instance went too far and Brent understands that.”