SheKnows heads to Southport, North Carolina, to hang out on the set of Nicholas Sparks’ new film Safe Haven. We chat with the film’s star, Josh Duhamel, about the role and being a dad. 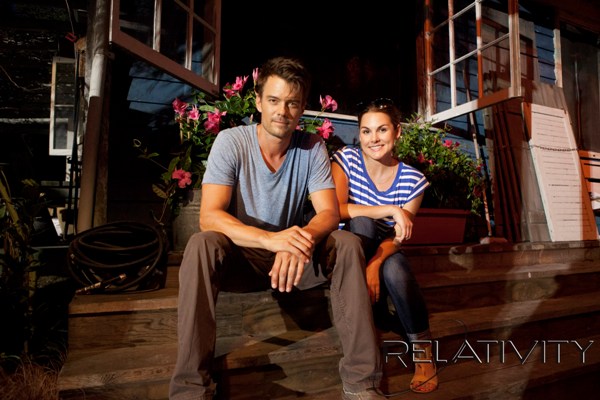 When I arrived on the old wooden dock in Southport, North Carolina, the only thing that didn’t look straight out of a Nicholas Sparks novel was the cameras. Everything else — the whitewashed colonial homes with American flags waving, the elderly woman sitting on her front porch in a rocking chair and the local kids laughing and running down the street — made me feel like I had magically stepped into the actual town from Sparks’ best seller, Safe Haven.

But it wasn’t movie magic. Aside from a general store built for Josh Duhamel‘s character Alex, everything I mentioned are authentic staples of the quiet little town. In one word, it was idyllic. 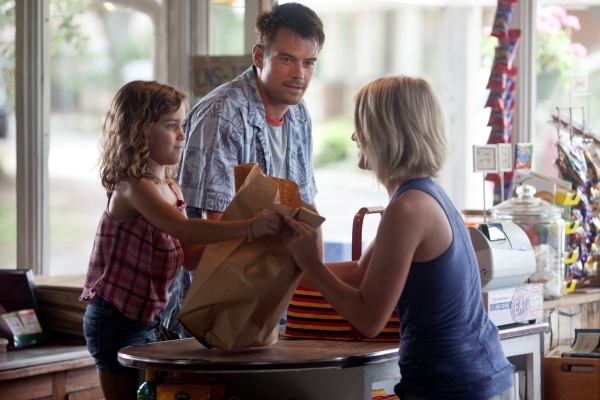 The film stars Duhamel as a widowed father of two who develops a relationship with the mysterious new girl in town, Katie, played by Julianne Hough. The day we visited the set, Duhamel wasn’t shooting any scenes. He was just there, hanging out in a T-shirt and jeans, enjoying the lovely atmosphere.

“I love it here,” Josh told SheKnows as we sat at a picnic table, staring out over the sunset on the bay. “I love the beaches. They’re some of the best-kept secrets in the country. The sand is soft and the water is warm. The waves are nice.”

With his laid-back attitude and welcoming personality, you could definitely see Josh settling down in a small town like Southport. Even his superstar wife Fergie, despite all her glitz and glam, is a fan of the vibe.

“[Fergie] was out here,” Josh told us. “She loved it. We could probably live here. The reality is we couldn’t right now, but I really do like it. It’s pretty perfect.” 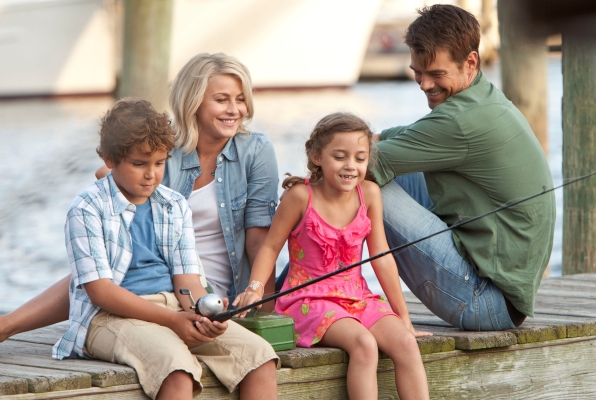 When he wasn’t filming, Josh spent a lot of time hanging out with his young co-stars Noah Lomax and Mimi Kirkland, who play his children in the film. Noah apparently is quite the football star at his school, and was on strict instructions from his coach to keep up his practice. Considering his love of sports and kids, Josh was happy to help.

“His football coach wants him to be training while he’s here because the rest of the team is training, so I was like, ‘I’ll do it,’” Duhamel said. “So we went out there and did some drills. I talked to my wife’s dad because he was an ex-football coach and I was like, ‘He’s a defensive lineman, what do we do?’ And he’s like, ‘He’s got to have quick feet.’ So he gave me some drills to do with him. But mostly we body-boarded!”

Duhamel took a similar trip with his on-screen daughter Mimi, so they had a chance to get to know each other before they started filming.

“Before we started shooting, I called Mimi’s mom and asked if she wanted to come to the beach with me,” Duhamel said. “We spent three hours on the beach messing around so when we got out here she was comfortable.”

Despite rumors in December that Fergie may be pregnant, the couple have not confirmed that they are expecting. However, both have been quoted in the past saying that they do want kids one day.

To see Duhamel in a fatherly role even sooner, though, don’t miss Safe Haven in theaters on Valentine’s Day!

And for your chance to meet the cast, attend “A Night with Nicholas Sparks’ Safe Haven: Filmmakers, Author and Stars Bring the Book to Life,” on Thursday, Jan. 17th! Nicholas Sparks, director Lasse Hallstrom, Josh Duhamel and Julianne Hough will be broadcasting live to select theaters nationwide. Buy your tickets now!