It seems like forever since I last got my fix of PLL, but they sure gave us a plateful of drama and disaster in their returning episode!

Dear Pretty Little Liars fans, where did we leave off? Oh right, Toby (Keegan Allen) is part of “A.” Or at least, his dark hoodie and murderous rage seem to favor that theory. Can we all safely assume that “A” is a group of people now? 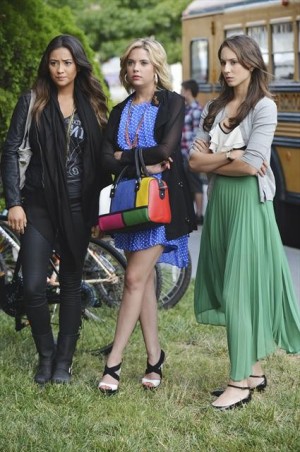 And the only other bit of relevant information from last season: Garrett (Yani Gellman) died, but not before telling Aria (Lucy Hale) that her father (Mr. Montgomery) was involved somehow with Ali (Sasha Pieterse), as they were together the day she died. (Is it just me, or does her dad scream “sketchy” to you?) And Aria, while trapped in a box, stabs her attacker (that tidbit of information proves valuable by the end of this episode).

With a mysterious skateboarder almost getting run over by a terrifying attacker in an Escalade. The attacker is unveiled as Toby (big shocker, given the last episode). In a typical PLL close call, the skateboarder escapes. Also in the first few scenes, a newly released (from the mental institution, mind you) Mona (Janel Parrish) sneaks into Hanna’s (Ashley Benson) room to plead for her friendship, claiming her parents are forcing her back to Rosewood High. (Yeah, that’s the way to build friendships and convince someone of your sanity: by sneaking into their room.)

Emily (Shay Mitchell) also finds out about Mona’s return, at about the same time she finds out her parents have set up alarms around the house, including her famous window. And it’s her dad’s cell phone that’s the trigger to turn them off and on, essentially putting her under house arrest (for her safety).

Aria and Spencer (Troian Bellasario) also aren’t happy about Mona’s return, and are shown discussing how to prod her for more information on “A.” Then Spencer goes in for the kill by asking Aria if she spoke to her dad about Garrett’s tidbit of information. Aria seems flustered and angered, and becomes defensive. She’s also feeling the weight of not telling Ezra (Ian Harding) he has a son. Seems like guilt runs rampant in this family.

Caught up? Now for the dramatic moments… 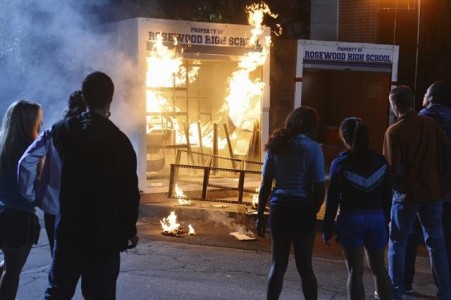 Everything comes full circle with this show, doesn’t it? Believable soap opera. It’s genius. Who can’t wait for next week?