Mila Kunis has been under increasing fire for the spate of photographs that show her walking out with boyfriend Ashton Kutcher dressed in ratty sweatpants. Why isn’t her similarly dressed boyfriend feeling the heat? 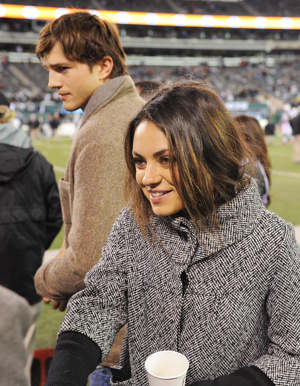 Mila Kunis isn’t exactly looking like the Sexiest Woman Alive in paparazzi photos of the star, which show her dressed in sweats, without makeup, and sporting messy ponytails.

Star Magazine reports that boyfriend Ashton Kutcher is so fed up with Kunis’ tendency to dress way down that he dropped a big hint over the Christmas holidays — a $250,000 makeover package.

Um, what? How can a makeover cost a quarter of a million dollars? Hair, makeup, clothes, some personal training at the gym — how exactly does that add up to hundreds of thousands of dollars? Does the package include surgery or something?

Star says that Kunis wasn’t exactly thrilled with her gift, in the grand tradition of gift recipients not particularly liking gifts that are actually a nag wrapped in fancy paper (Boyfriends: You don’t want to go buying your special lady a subscription to Jenny Craig that she hasn’t specifically asked for, mmmkay?).

A source reported: “Mila took the gift as a huge insult. ‘She told Ashton if he wanted a fake, plastic girl, he should have stayed with Demi. That’s when he snapped and told her, ‘You’re worse than Demi!'”

That’s all good and well, Star Magazine source, who also said that when Ashton and Mila started dating “he thought Mila was one of the hottest girls in the world” and that “in the eight months or so they’ve been together, she’s totally let herself go.”

Star says that Mila’s put on nearly 50 pounds. Um, no way. At her petite height of 5 feet 4 inches, 50 pounds is a huge amount. Mila famously got down to 95 pounds to play a ballerina in Black Swan; she couldn’t be more than 20 pounds over that now.

Gossip mags aren’t just giving Mila hassle for her weight, however — they’re also dinging her low-maintenance fashion. “Run a brush through your hair, take a shower, and if you’re going to wear sweatpants, at least get some cute ones,” says Cele/bitchy.

The New York Daily News calls Mila “Hollywood’s frumpiest, dumpiest celeb” and “the schlubbiest woman alive” (I’d like to be so schlubby! Please, let me be as schlubby as Mila Kunis!).

At least the Daily News noticed that in the pap pictures where Mila’s in sweatpants, Ashton Kutcher is similarly attired: It calls Kunis and Kutcher “a match made in casual dressing hell.”

Other stories make much of Mila’s appearance, and say nothing about the fact that Kutcher is dressed in the exact same kind of casual gym wear.

Hey, Kutcher was one of People’s 100 Most Beautiful People in 2008 — why don’t we read about him letting himself go?