With a setting to die for and incredibly rich characters, Emily Winslow’s newest literary mystery, The Start of Everything, is our Red Hot Book of the Week. 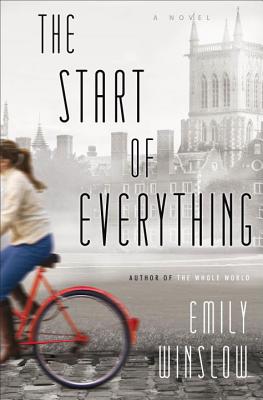 Emily Winslow is a relatively new voice on the literary mystery scene, but she is already showing that she is an author who can deliver reliably wonderful novels, first with The Whole World and now with The Start of Everything. As an American who has been living in Cambridge with her British husband since 2006,  she writes books set in Cambridge that are authentic in their setting and the voice of their characters, while still being easily accessible for American readers.

Winslow’s books blend intriguing mysteries, gorgeous writing and well-drawn characters, which is why we just can’t resist naming The Start of Everything our Red Hot Book of the Week.

About The Start of Everything

Mathilde does not get on particularly well with other people, but she is very well-suited to her work in the Cambridge post office following up letters with incomplete addresses. These days there is a series of letters that has captured her attention, increasingly desperate notes addressed only to Katja from a young man named Stephen. There is no Katja at Cambridge, though, or at least not one who remotely matches the description given in the letters.

From name with no person, to person with no name. Thanks to the spring thaw, a body has been found in the sluice gates outside of Cambridge. Detectives Chloe Frohmann and Morris Keene have very little to go on. It is clear that they have the corpse of a young woman, but discovering her identity seems nearly impossible as her body is so badly decomposed that there is not even the possibility of finding a DNA match. The only clues they have are the clothes the young woman was wearing when she died and some hairs found stuck to them.

The Start of Everything is told alternatively from Mathilde, Detective Frohmann and Detective Keene’s points of view, and before long it becomes evident to the reader that there may be some connection between Katja, who seems not to exist, and the murdered and yet-unidentified young woman. For Winslow’s characters, though, the process of discovering just what that connection is will force them to sort through a number of mistaken identities, misunderstandings and secrets, as well as some of their own personal weaknesses.