As rumors circulate that Taylor Swift and her latest beau Harry Styles (are you sitting down?) have split (noooooooooo), we have to ask — is it time for Swift to take a break from the dating scene? You know, before her love life (or lack thereof) overshadows her impressive career (if it hasn’t already). Let’s explore, shall we? 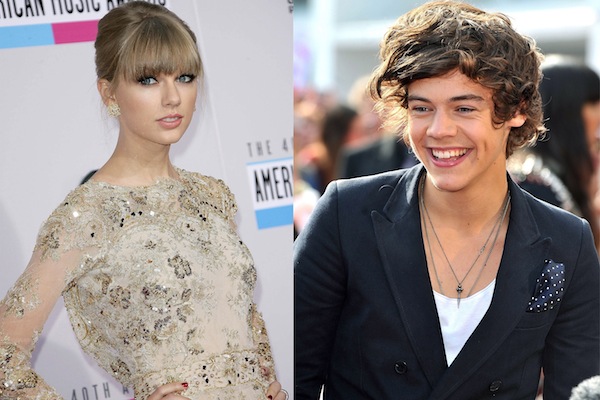 OK, Ms. Swift, time for a little girl chat. You broke every 12-year-old’s heart when you dated Joe Jonas. You annoyed women of all ages when you dated Jake Gyllenhaal and John Mayer. You established yourself as president of Team Jacob when you hung out with Taylor Lautner. When you dated Conor Kennedy, you proved you could date anyone you wanted to be with, making you the envy of females everywhere. With your latest conquest, One Direction’s Harry Styles, you risked alienating every member of your female audience.

The point of all this? First, you’re kind of on the last nerve of every woman for dating the most eligible bachelors of pop culture. Second, let this track record (which is actually missing a few names) of failed flings demonstrate that just because you can doesn’t mean you should.

One common denominator: You!

Now for a bit of tough love. Not that you asked Ms. Swift, but here’s what every gal with a string of failed relationships has to face at some point. The only common denominator in one romance flop after another — is you. We don’t doubt for a minute that some of these guys acted like douche bags (John Mayer proves it every time he opens his mouth), and we’re equally certain that more than one of them did uncool things that were hurtful.

But at the end of the day, you have to realize you were dumped. More than once. So what’s happening here? Are you high maintenance? Do you have extremely poor taste in men? Are you a drama queen? Is your career too demanding and creates too much distance?

Whatever it is, it’s OK. But it is also time for a break. When we don’t take a respectable breather between relationships, we bring all the baggage, mistakes and negativity from the last relationship to the new one. It may be time for a 12-step relationship program.

When you are ready to date again, maybe it’s time to explore the option of an average Joe. The famous guy thing doesn’t seem to be working too well.

We love Taylor, but here’s another reason she is wearing on our last nerve: Many of us are in the day-to-day trenches with kids, full-time jobs and marriages. And while we wouldn’t trade that for the world, we look at a woman like Taylor who has limitless resources and we just want to shout, “Enjoy yourself!”

A young single woman who has Swift’s kind of fame and fortune without the accountability of children and/or a spouse needs to travel to unfamiliar places, develop expensive hobbies, and have the time of her life outside of a relationship. Sometimes a girl just has to forget boys exist and do her own thing for a while. Boys will still be there when you get back.

If not for you, then for the rest of us

As a final plea, if Ms. Swift is not willing to take a break from relationships for herself, maybe she can do it for the rest of us. Her love life is becoming a bit cliché, a bit of a punching bag (sadly), and threatens to overshadow her tremendous talent and success. That would be a disaster. We’d feel much better if we saw photos of her hiking mountains or playing in the surf with a puppy, and taking time to heal, instead of reading about her next soon-to-be ex-boyfriend.