The heated gun control debate between Piers Morgan and Alex Jones on Monday night turned bizarre and some even say delusional. 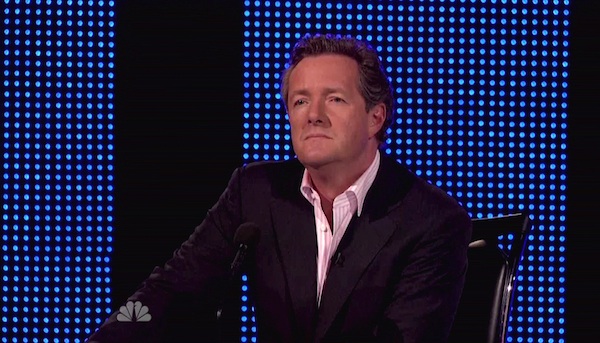 CNN’s Piers Morgan faced gun control rival Alex Jones in what is now known as Piers Morgan vs. Alex Jones. The tension between the two stems from Morgan’s strong advocacy for increased gun control in the United States after the tragic — and some say preventable — Newtown, Connecticut, school shooting in which 27 people died, 20 of whom were children.

Jones calls the comments Morgan made regarding gun control and gun ownership in the United States akin to treason and demands the U.S. government deport Morgan. Specifically, Jones’ petition states that Morgan “engaged in a hostile attack against the U.S. Constitution by targeting the Second Amendment.”

Jones’ petition goes on to request that “…Mr. Morgan be deported immediately for his effort to undermine the Bill of Rights and for exploiting his position as a national television host to stage attacks against the rights of American citizens.”

It’s unlikely Morgan will actually be deported since White House spokesman Jay Carney said in response to news of the petition that he supported Morgan’s right to free speech. Said Carney, “…It’s worth remembering that freedom of expression is a bedrock principle in our democracy.”

Some of Jones’ notable lashes at Morgan include, “1776 will commence again if you try to take our firearms! It doesn’t matter how many lemmings you get out on the street begging for them to have their guns taken! We will not relinquish them! Do you understand?” (Note: 1776 marked a pivotal year for Americans against the British during the American Revolution).

Jones’ anger seems to stem from the idea that a globalized world and international government powers are deliberately attempting to disarm citizens to commit, as Jones put it, “world tyranny.”

Alex Jones spoke fast and loud as he flipped through crumpled printouts of statistics and rushed through various points about dictators Adolf Hitler, Joseph Stalin, Mao Zedong, Fidel Castro and Hugo Chávez, who committed heinous acts of violence against their citizens because, according to Jones, they were able to remove firearms from ordinary people.

Jones also remarked how the United States suffers from “mass murder pills,” also known as prescription drugs, and claimed such drugs are responsible for the largest percentage of unnatural American deaths. He made the brief point that the ability of pharmaceutical companies to market and sell such high quantities of prescription drugs deserves greater attention than the gun control debate.

The national gun control debate: how to prevent gun violence >>

Morgan sat quietly and politely nodded as Jones became increasingly passionate about his “world tyranny” theory. Jones’ confrontation against Morgan ended with an invitation for Morgan to “become an American and join the Republic” by hunting with him.

On Tuesday, Morgan said Jones’ rant discredited his own argument against gun control.

“I can’t think of a better advertisement for gun control than Alex Jones’ interview last night,” Morgan said. “It was startling. It was terrifying in parts. It was completely deluded. It was based on a premise of making Americans so fearful that they all rush out to buy even more guns.”

You can watch the complete Piers Morgan vs. Alex Jones confrontation from Monday night below. Jones begins his comments at the 1:20 mark.