Did you watch Brandi Glanville confront ex-husband Eddie Cibrian’s mistress? Scheana Marie, described as a “starf**ker” by the Real Housewives of Beverly Hills star, was literally shaking during their tense encounter! 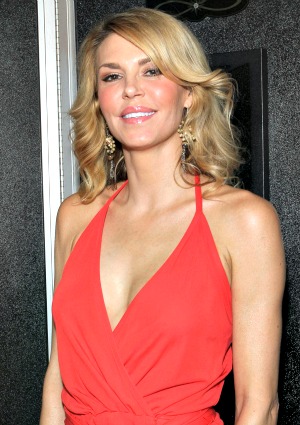 Brandi Glanville made a surprising announcement while confronting one of her ex-husband Eddie Cibrian’s mistresses: If he is cheating on new wife LeAnn Rimes, she hopes they’ll stay together.

Why? Despite the emotional turmoil the actor put his ex-wife through, the pair are parents of two young boys, and the Real Housewives of Beverly Hills star doesn’t want to see them go through the pain of losing their stepmom — no matter how much they may spar.

Confronting mistress Scheana Marie while cameras rolled, Brandi Glanville stated bluntly, “I know that you were f**king my husband, I get that!”

In a pre-taped interview, the 40-year-old called the woman who had an affair with then-husband Eddie Cibrian both a “starf**ker” and a “hooker.”

“I know what you guys were and what you weren’t,” she said to Scheana, adding, “I was the mother of his children, I was his wife, I was his everything. You were the other woman, so don’t get it twisted.”

Despite the aspiring actress trying to stand up for herself and explain just what she was and wasn’t aware of during her relationship with Eddie Cibrian, Brandi jabbed, “Look at where you are in your life and I’m in such a better place —I win — You know what I mean.”

LeAnn Rimes talks about being the evil stepmother >>

Brandi remained tough during her confrontation with the mistress, whom she told, “By the way, there was more [girls] than just you”… until talk turned to her 9-year-old son Mason and 5-year-old son Jake.

Wiping away tears, the reality star said, “You should see my kids. They’re the happiest kids that come from a divorced family. I will not ever say a bad word about their dad in front of them… I will never ever let anything happen to them.”

As Scheana’s eyes also began to water, Brandi’s magically dried up. Cutting the mistress’ emotions off, she vented, “Don’t cry, really. I lost my family. I lost everything that I had. So if anyone’s going to cry here it’s not going to be you.”

Do you think it was a good idea for Brandi Glanville to confront mistress Scheana Marie?