Just because it’s about a bunch of teenage melodrama doesn’t mean grown women can’t be completely obsessed with Pretty Little Liars. Here are just a few reasons (of the embarrassingly large amount) we are counting down the pretty little minutes until tonight’s winter premiere. 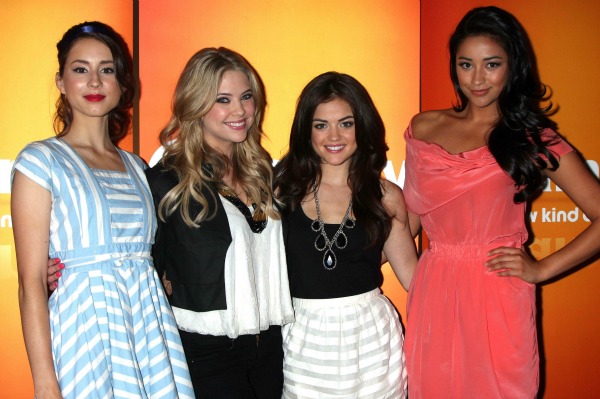 With all the intrigue surrounding A’s potential posse last season, we could only keep our fingers crossed that our favorite English teacher — and Aria’s longtime love — Ezra wouldn’t emerge as a co-conspirator. So what a happy day it was when we learned it wasn’t a murder plot hiding in his closet, but rather an illegitimate baby he never knew existed. Okay… so we probably found more relief in that revelation than Aria did. Ezra’s ex/baby mama, Maggie, attests to Aria that she wants the former couple’s love child to remain under wraps but, honey, you and I both know there’s bound to be some fallout from this in the near future.

Technically, it’s been more than a day in the life of the show since Spencer lost her v-card to Toby, but they’re still in that foggy-love-goggled morning-after phase. And, hey, we can’t blame them. After a ton of breaking up and making up and a liberal amount of heavy petting, this couple was cruising on several seasons of emotional and physical foreplay. Unfortunately for poor Spence, that whole suspicion she had about Toby in the beginning — you know, the one where he was a cold-blooded killer — just might have been spot-on. When last season left off showing Toby — in the signature A team black hoodie — conspiring with Mona, we couldn’t help utter a guttural “Noooooooooo!” (Yes, it was totally out loud… don’t act like you didn’t do it too.)

After the fall finale, we waited patiently (all right, “patiently” may be stretching the truth) for the much-hyped Halloween special to tide us over until tonight’s winter premiere. Oh, how it delivered! Although we might not be inclined to celebrate such a spooky holiday if people were constantly trying to kill us, the Liars found it fitting to hop aboard the Ghost Train for their school’s annual festivities. As it turns out, they had at least one reason legit enough to risk life and limb: Adam Lambert! Between sets, he was getting awfully chatty with Aria, leading us to wonder… could there be an Adam/Aria storyline this season? We wouldn’t mind a cameo or two from the glam Goth rocker.

The biggest shocker aboard the Ghost Train came in the form of a body bag being iced down in the soda cooler. It belonged, naturally, to none other than the original A, Alison DiLaurentis. Who put it there? Who put her in the body bag to begin with? Did it, as implied by Garrett — who meets an untimely demise aboard the train — have anything to do with Aria’s daddy dearest? Maybe tonight’s the night a little more light is shed on the final moments of Rosewood’s unmatched-even-in-death mean girl. And, may we say, it’s about time someone started poking around shady Mr. Montgomery. In light of his previous fling with a much younger blonde, Aria’s pop seems likely to be hiding more sinister secrets in his pretty little past.