Actress Laurie Metcalf, best known (and loved) for playing Roseanne’s sister on her eponymous blue collar sitcom, works with the director of Wicked (and another special someone). 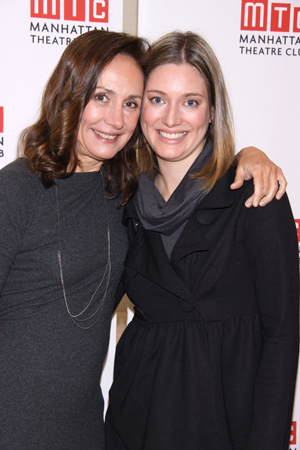 Laurie Metcalf made a name for herself in the late ’80s playing adorable Jackie, Roseanne‘s little sis, for nine years on Roseanne, but after the show ended, the roles she were offered on the big screen usually came down to something like the “Andy’s mom” that she played in all three Toy Story movies.

So Metcalf turned to the stage instead, appearing in productions in New York, Chicago and London, but nothing that made a huge impact. That may change Thursday, with Metcalf in the starring role in The Other Place, a dark and twisty drama directed by Broadway giant Joe Mantello (best known for a little play called Wicked — heard of it?).

One perk of working for the Samuel Friedman Theatre, where The Other Place appears, is that the theater rents Metcalf a place to live: “Midtown. Five minute walk to the theater,” Metcalf told The New York Post’s Cindy Adams.

Another: Metcalf’s look-alike daughter, Zoe Perry, is in the cast.

Like many actors, Metcalf wasn’t exactly up for her daughter following in her career footsteps. She hoped her daughter wouldn’t sign on for a career full of ups and downs, failed auditions, and painful public scrutiny.

“I wasn’t for her being an actress,” Metcalf said, “but during my nine years on Roseanne, she played me as a little girl three times.”

Roseanne fans may remember Perry as “Little Jackie” in the episode “All About Rosey” (in which numerous television moms, including Leave it to Beaver’s Barbara Billingsley and Lassie/Lost in Space’s June Lockhart appear to ask Roseanne questions about her portrayal of a television mom), as well as “Halloween IV” (a Halloween episode that borrows the plot of A Christmas Carol).

Perry got bit by the acting bug and studied at Northwestern. Metcalf says Perry auditioned for the part, and “I stayed out of it.”

Now that the mom-and-daughter crew work together in the same city, they also spend a lot of time together: “We sit and knit together,” Metcalf said. “Knitting’s my comfort. It’s portable. Keeps your hands busy when you’re in production, but you can also focus on other things. There are fewer knitters today because now people fiddle with iPhones and iPads.”

If the strong opening buzz for The Other Place and Metcalf’s performance is anything to go by, Metcalf’s going to have a lot less time free to knit.