Brad Pitt’s vague “tweet” suggests he’ll pay a visit to China. One problem: They doesn’t want him there. 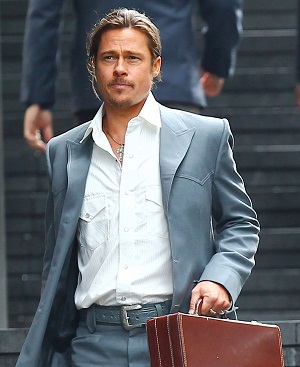 By this (Tuesday) morning, the tweet had been removed and the account read, “He hasn’t tweeted yet.”

Despite his single tweet’s disappearing act, Brad is pulling in big numbers. According to MSN, the comment was forwarded 31,000 times. Pitt also earned a whopping 14,000 replies. By the end of the night, the Hollywood hunk already boasted 100,000 followers.

Well played, Brad Pitt. So, why the disappearing act?

It might have something to do with the fact that he isn’t even allowed in the country. Pitt was banned from entering China after his role in the 1997 movie Seven Years in Tibet. The movie portrays China’s pre- and postwar prison system and general Chinese life very harshly (though not necessarily inaccurately). Its release ticked off a bunch of Chinese officials, which led to Pitt being banned.

The disappearing tweet also could have been the work of Chinese censors. As you know, nearly everything Chinese citizens do falls under harsh speculation. That includes the internet.

It’s completely legal for Chinese censors to delete anything they decide might be “sensitive.” Websites must keep in-house censors who constantly scan their sites for anything the government won’t be happy to read. Failing to keep their sites clean can result in fines and even the site’s termination. Harsh.

If you’re wondering if it’s possible that it just isn’t Brad Pitt, that seems unlikely. Just like with Twitter, Weibo has a very extensive verification process. To become a “verified” account, celebrities must submit copies of their ID and job evidence along with other documents.

So far, Pitt’s PR group has not commented. We’re sure many Chinese citizens are hoping his one and only tweet isn’t his last.