Uh-oh! The Bravermans experience a whole new set of trials and tribulations. 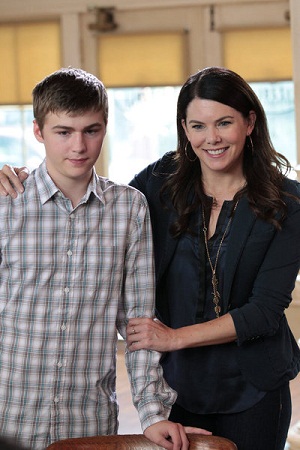 Tonight’s Parenthood tackles one pretty serious issue, as well as a couple mini-dramas.

First things first: The preview at the end of last week’s episode looked downright juicy… and disturbing. It appears Sarah’s (Lauren Graham) youngest, Drew, has inadvertantly knocked up his quasi-girlfriend, Amy. While Drew immediately assumes it’s his, let’s not forget that this season started off with Amy breaking up with Drew for a college guy she met at camp. Who knows what those two were up to, right? The situation is shady, at best. But Drew’s desire to keep the baby is admirable (if not a little bit clingy, as always).

Things are made worse for Drew when Mr. Cyr, Sarah’s ex, spots Drew and Amy fighting in the hallway. Mark — Mr. Cyr — goes to Sarah with the news (whether he actually knows the whole story isn’t entirely clear). That might make things awkward with Sarah and Hank, but Mark definitely does the right thing.

With this plot line Parenthood is set to tackle teenage pregnancy — a topic many other shows have already covered. What fresh perspective will they bring to the drama?

Things in Crosby’s (Dax Shepard) house are far from perfect after his mother-in-law moves in. She has her own way of doing things and she’s bound and determined to push her ways onto his family. From cranking the heat (and the humidifier) to leaving stuff all over the place, she’s left her mark on his house. But, she’s also sinking her teeth into his family’s routine. She refuses to wait for Crosby to get home before they have dinner and to top it off, forces Cros to eat fish, which he hates. They may seem like small things, but when you add them up, they’re big annoyances. Someone please put this woman in her place.

Finally, the tension continues to escalate between Julia and Victor. Just watch…

While viewers have remained extraordinarily sympathetic to Julia’s adoptive son, this might be the turning point. He’s really acting like a spoiled brat now; he’s on level with his adoptive sister, Sid. We all want Victor to become a loving, functional member of the Braverman clan… but this scene is beyond annoying.

See how it all turns out tonight on Parenthood at 10/9c on NBC.