Matt Dallas has a big year ahead of him. Not only has the Kyle XY actor officially come out as gay, he’s planning on getting married! 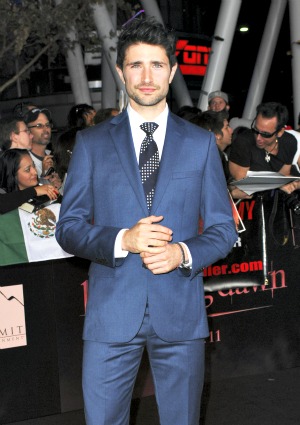 Yes, Matt Dallas is gay, and yes — he’s taken! The Kyle XY star announced Sunday that he and boyfriend Blue Hamilton are getting married.

Sharing the happy news on Twitter, Matt Dallas wrote, “Starting off the year with a new fiancé, @bluehamilton. A great way to kick off 2013!”

Along with the announcement, which confirmed long-running speculation the 30-year-old is gay, he tweeted a sweet photo of his 25-year-old musician beau snuggled up with a dog.

Although this is the first time Matt Dallas has chosen to publicly address his sexuality, gay news blog After Elton asserts the actor was “infamously cyber-bullied by Perez Hilton.“

Celebrity news site WWTDD wrote in 2010, “Perez delights in calling him a fag anyway, and even nicknamed him ‘Kyle KY.'”

Citing two examples of the controversial blogger’s jabs at Matt Dallas, they point to a photo of the actor that Perez captioned, “celebrating his birthday in fagulous style.” In a second place the outspoken blogger wrote, “The fagulous Kyle KY star debuted his new ‘do at the Family TV Awards in LA on Thursday night.”

Reporting news of Dallas’ engagement, Perez Hilton wrote Monday, “The dark and handsome actor has been dating the LA-based musician since 2009, and obviously the pair feel strongly enough about each other to commit to that forever (or until divorce) love!”

According to reports, Matt Dallas and Blue Hamilton (birth name Brandon Blue Hamilton) have been quietly dating since 2009. The music producer from Atlanta has worked with Justin Bieber on a pair of tracks, while it was recently announced his husband-to-be has joined the cast of ABC Family’s Baby Daddy.

Do you think Perez Hilton’s comments about Matt Dallas were out of line?