With the holidays behind us, we all have more wiggle room in our wallets. While Honey Boo Boo matriarch Mama June is shelving her family’s spending money this year, a few other celebs are already finding frivolous things to throw their dough at in 2013. 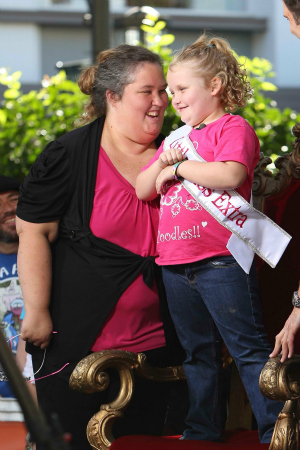 Honey Boo Boo… not so cuckoo?

When TLC first unveiled their now-hit series Here Comes Honey Boo Boo, critics couldn’t wait to spit their two cents about the depravity of publicizing the lives of a clan of country bumpkins famous for participating in beauty pageants. And sure, Mama June may not always make the most responsible choices when it comes to her kids — pork rinds and Oreos do not a balanced diet make — the larger-than-life head of the household proves she does have some worthwhile parenting acumen. Instead of going redneck highbrow by splurging on luxury items, June has opted to stash the reported $20,000 the family earns each episode into trust funds to be split among her four daughters. Hmm… a reality TV mom not interested in cashing in on her kiddos? What a novel concept! Kris Jenner should redneckognize!

Honey Boo Boo is on Barbara Walters’ “Most Fascinating” list >>

In addition to straight-brimmed baseball caps, pants two sizes too large (or too small, depending on the day), and obnoxiously large diamond stud earrings, you can add reefer to the ever-growing list of regret-worthy purchases made by Justin Bieber. After such a banner year of scandals in 2012, how could the Biebs possibly keep pace if he didn’t immediately kick off the New Year with a disreputable deed? Well, consider him off to a running start — the Biebs was photographed partying it up with what is speculated to be a blunt between his teenybopper fingers. And it looks like it won’t be the last time the pop star spends his cash on “party favors.” The Biebs’ bodyguards now make it a point to post signs wherever he goes stating that he will own any pictures taken in his presence, making it seem like the Biebs wants to make sure he can blaze up without worrying about pesky photogs.

Mamas, don’t let your babies grow up to be Beliebers >>

With all the arrests and court dates Lindsay Lohan had last year, the troubled starlet made Charlie Sheen’s tiger blood bender seem as tame as a tabby cat. So one might think LiLo would resolve to turn over a more discreet leaf in 2013. Well, one would be wrong. Instead of showing up to her scheduled court date for clocking a psychic in a NYC nightclub, Lindsay opted to live it up in London. We’re not really sure how the actress managed to make money last year — surely the disaster that was Liz & Dick couldn’t have been very lucrative — but it’s a safe bet whatever is in her bank account is being blown on clubbin’ and legal fees. Our suggestion? She should skip the social scene and buy a clue.