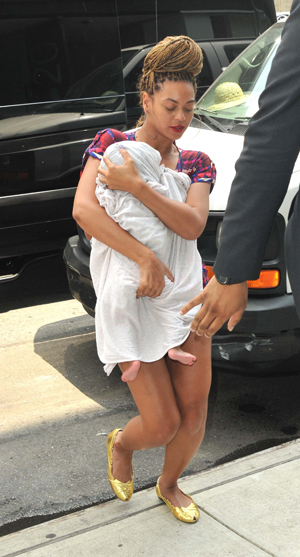 Why go to Chuck E. Cheese when you can have a private million-dollar suite? No-longer-that-new parents Beyoncé and Jay-Z are reportedly throwing a first birthday party for baby Blue Ivy in a super-lush private suite.

The suite, which Jay-Z rents for a cool million bucks a year, is located in the Barclays Center, the home of New York NBA team the Brooklyn Nets.

The website for the Barclays Center describes the suites as “comprised of only eleven suites and located on the discreet event level, The Vault is the most elite club in the country. Each Vault has its own private sliding door entry, lounge seating, flat screen TV’s [sic] and contemporary furniture, which promises to deliver the elegance and style that only Barclays Center will showcase.”

A source told Us Weekly that the suite has “an area for Blue filled with toys.” That’s some luxurious playroom!

The Christian Post reported that Bey and Jay-Z are throwing a fancy-schmancy birthday party for Blue there, with an invite list including Gwyneth Paltrow with Moses and Apple in tow, and Solange Knowles (Beyoncé’s sister) with her son, Julez.

First birthday parties are typically when newish parents make a huge effort on a party. They can hardly believe they’ve made it through a year unscathed, and the babies aren’t old enough to register an opinion yet, so parents are free to do things like only invite their own friends, dress their babies in ball gowns or tuxedos, and turn their backyards into miniature zoos or train yards.

For instance, Kourtney Kardashian celebrated Mason’s first birthday by renting a carousel and a full petting zoo. Mariah Carey dressed twins Moroccan and Monroe in white formalwear for a lavish affair in Paris that saw the babies receiving a toy Ferrari and a miniature all-white piano.

Beyoncé and Jay-Z, who reportedly spent $1.5 million outfitting Blue Ivy’s nursery, and $600,000 on a solid-gold rocking horse, are not known for restraint anyway. What do you suppose they’re getting up to at the Barclays Center right now? Leafing a $10,000 personal smash cake for Blue Ivy with flakes of platinum?

Say, do you suppose they’ll allow a picture in 2013 where they aren’t covering up Blue Ivy’s face? Shades of Michael Jackson’s kids, being photographed for years swathed in veils.