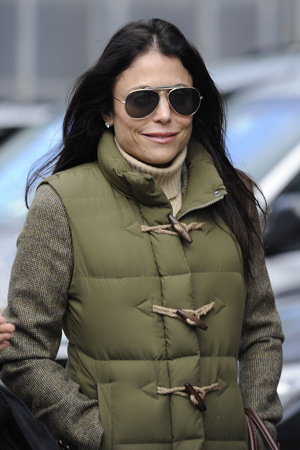 Think Bethenny Frankel doesn’t know you’re judging her over her decision to divorce Jason Hoppy? Think again: She sees the criticism — and apparently understands why everyone is talking crap.

The former Real Housewives of New York star split from her husband of two years just before Christmas.

“It brings me great sadness to say that Jason and I are separating,” she said in a Dec. 23 statement. “This was an extremely difficult decision that as a woman and a mother, I have to accept as the best choice for our family.”

They’re reportedly still living together in New York City, but Frankel filed paperwork to dissolve the marriage late last week, according to TMZ.

Not that most fans didn’t see it coming. Divorce rumors have plagued the tumultuous pair over the course of their marriage, but the rumor mill really went into overdrive last summer. She downplayed questions of a split on her daytime talk show, though.

“I put it all out there on my show,” she told the audience during her debut show. “If it’s out there I’ll tell you. I’m in a good marriage. We have issues and we’re not perfect, but, we work on it every day. We’re committed.”

Bethenny Frankel is drinking her way to the top >>

And how is the chef and Skinnygirl mogul coping with the split? With food, of course.

“Does anything ease your sorrows like an egg sandwich?” she tweeted on Jan. 6.