Heidi Klum is so over young hot studs and says old guys are where it’s at. Don’t think that’s going to stop her from getting down and dirty, though — the newly single supermodel is a freak in the sheets. 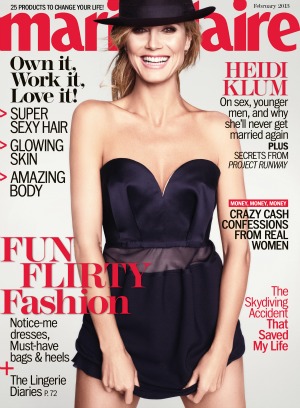 Heidi Klum is single and ready to mingle, but 20-somethings need not apply despite the fact that she could totally land them. The Project Runway star says that these days, older men are where it’s at, but that’s certainly no impediment to keeping things hot, hot, hot in the bedroom.

“I can understand why a woman finds a young man attractive, because the truth is that when men get older, their shape changes,” Klum told Marie Claire. “Younger men train more, and when the clothes come off, it is nice to look at a sexy, ripped body. But I am realistic. I’m turning 40 next year; I don’t think I could deal with waking up next to a 25-year-old.”

That’s not going to stop her from getting freaky, though. Klum is all about showing her wild side. “Some people are more experimental in bed and others are more boring,” she says. “If you are wild and crazy, bring it on so the other person is well aware that you have little devil horns that come out every once in a while. It’s good to make an effort to dress up sometimes, to do things outside of the norm.”

And by the way she is totally over Seal, just in case you were wondering. “People say, ‘Oh, God, how devastating to go through a divorce.’ Did I wish for this to happen to my family? No. But everyone is healthy; we’re moving on with our lives,” she explains. “If someone got [very sick], God forbid, that would be a real problem. It’s not what I wanted — it’s not what anyone wanted — but it’s not a real problem.”

Nonetheless, she’s in no rush to walk down the aisle again despite what by all accounts is a hot and heavy relationship with her bodyguard. “I don’t think so. No. No,” she says. “I wanted to keep the memory of our wedding alive every year, that’s why I thought it would be fun to get married over and over. But now I don’t think it’s that important. I’m not angry about anything, but I don’t think I will. Maybe if I’m with someone for 15 or 20 years, and we do it in our old age as a fun thing to do… But I don’t have the urgency anymore.”

Read the complete interview with Heidi Klum in the February issue of Marie Claire, on newsstands Jan. 15. Catch the Season 11 premiere of Project Runway Jan. 24; check local listings for times.