It’s that time again: We’re rounding up the top 10 box office flicks to help you decide your next moviegoing experience! This week’s breakthrough might surprise you. 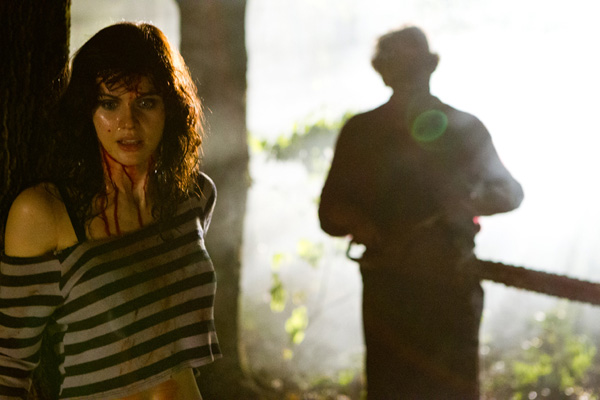 Texas Chainsaw 3D topped the list this week, debuting with an impressive $23 million. Not bad at all for the 1974 reboot. This time the horror’s right in your face with the help of an impressive and terrifying three-dimensional experience. The flick follows a young woman traveling to Texas to acquire an inheritance but a psychotic, power tool-wielding native adds a bit of a curveball to the agenda.

Tarantino’s latest endeavor has received mixed reviews for its language and historical context but one thing is certain: Django Unchained is making its mark. The film tells the story of a newly freed slave (Jamie Foxx) who partners with a German bounty hunter (Christoph Waltz) on a mission to find and rescue his enslaved wife from the clutches of Calvin Candie (Leonardo DiCaprio), one of the most-twisted plantation owners Mississippi has ever known. It’s a bold claim, but this may be Tarantino’s best yet! Django Unchained reeled in $20 million.

The Hobbit: An
Unexpected Journey

Peter Jackson’s The Hobbit: An Unexpected Journey came in at No. 3 with $17 million. The story follows Bilbo Baggins in the predecessor piece to Tolkien’s Lord of the Rings trilogy. From sword fights and folklore to dragons and the Shire, this film is the perfect escape from reality and a wild ride through the magical world of Middle Earth.

Hugh Jackman, Anne Hathaway, Russell Crowe and more pull together for the gripping tale of Les Mis. Musicals are said to be the pinnacle of acting prestige and judging by the dedication that went into this piece — from the incredible physical transformations of Jean Valjean (Jackman) to the grueling demand of countless hours singing on set — we’d have to agree. Les Miserables pulled in $16 million and we doubt that number will decrease much in the coming weeks.

What happens when Billy Crystal and Bette Midler team up to watch over their grandkids for the weekend while their helicopter parents leave town for work? One thing’s for sure, there’ll be a lot of laughs. Parental Guidance landed a seat at No. 5 with $10 million this past weekend.

Tom Cruise, aka Jack Reacher from the hit Lee Child series, packs a major punch in the action department. Reacher’s on a mission to off the man responsible for murdering five people, but when the suspect points the finger at Reacher he has to rely on his military expertise, evade local authorities and finish the task at hand before he wrongly ends up in a cell.

Judd Apatow’s self-proclaimed “sort-of sequel to Knocked Up,” This is 40 is a hilarious, yet brutally honest reflection on marriage, family, and aging starring Paul Rudd, Megan Fox and Leslie Mann. If you need a little comedic relief in your life, look no further. This is 40 reeled in $8.6 million this past weekend.

Lincoln remains a box office contender, coming in at our No. 8 seat. The compelling biopic managed $5.3 million and there have been whispers of some major awards for the Daniel Day-Lewis and Tommy Lee Jones leads.

Seth Rogen and Barbra Streisand pulled in at No. 9 with their ridiculously funny cross-country road trip. Rogen’s desperately trying to grow up and make a name for himself but when Babs catches wind of his ambitions to market himself across the States, she weasels her way into the shotgun seat and manages one last bout of chronic helicopter mothering.

Matt Damon and John Krasinski didn’t quite get off on the right foot with their eco film, Promised Land, but there’s still time for the flick to take flight. The film managed a dismal $4.3 million on its debut weekend but Damon’s a big name that can still attract audiences in the coming weeks.

17 hrs ago
by Araceli Cruz