Since transforming herself from a hard-clubbing “Guidette” into a happy mommy, Snooki Polizzi has found friends in new places — including one in the Republican Party. 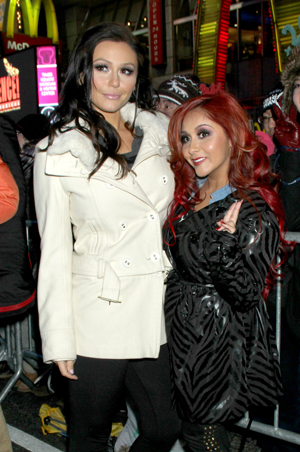 Does conservative politico Newt Gingrich have a thing for Snooki? Or is he just trying to turn her into a Republican?

The former speaker of the U.S. House of Representatives sent Snooki Polizzi a baby gift, which viewers get a look at on the Season 2 premiere of Snooki & JWoww, airing Tuesday at 10/9c on MTV.

Newt who? Looks like LaValle doesn’t really follow politics. Granted, LaValle is only 24 and was a grade-schooler during Gingrich’s heyday as House speaker from 1995 to 1999, but still.

When her man professed puzzlement as to who Gingrich was, Snooki tried to explain. “He, like, tried to run for president or something. He’s really cute, though.”

Gingrich and Polizzi met back in the summer, when both were booked on The Tonight Show on the same night.

“I saw some of your interviews when you did your first book,” Gingrich told Snooki pleasantly. “Congratulations on having two New York Times best-sellers.”

“I am trying to be like you,” Snooki responded, while the audience cracked up.

Hmm, if that’s so, maybe Gingrich was just trying to recruit Snooki into the Republican Party. He did send her an elephant, the symbol of the “red state” party. A coincidence? I think not!

The premiere also shows Snooki’s country club baby shower, where Snooki was notably uncomfortable in the upscale environment. Snooki disliked the valet parking, calling it something only rich people do, and said that the “classy joint” needed more animal print.

The baby gifts were all Snooki, though — JWoww bought her alcohol test strips for breast milk while Deena Cortese brought a onesie that read “Party, my room. 2 a.m. Bring your own bottle.”