Get ready for deception, corruption, abuse of power, love triangles, cheating and fake relationships! Revenge is back from winter break and it’s hotter than ever. 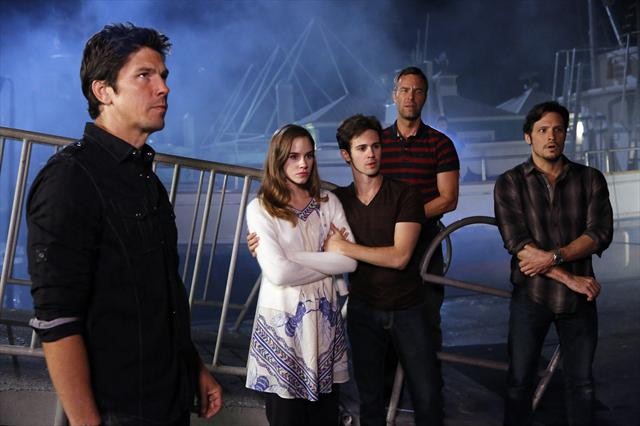 Revenge is back with all the drama we’ve come to expect from that scheming lot in the Hamptons. There’s power, intrigue, a secret group that no one has any idea what they actually do and a noticeably absent Padma (hmm?).

The Stowaway: Not for storing drugs, guys

So, we already knew that Jack’s (Nick Wechsler) new partners were troubled convicts out to avenge their father’s death, but did you know they’re also drug dealers? Declan (Connor Paolo) had his suspicions, so he went snooping around the bar and discovered a massive bag of cocaine hidden inside a giant bag of coffee beans.

The brothers realize Declan is onto their scheme and frame him. Police board Declan’s boat with drug dogs and find bags of cocaine. Jack refuses to let his little brother take the fall and claims the drugs are his, and gets hauled off to jail. We all know Amanda doesn’t let anything come between her and her family (and that she’s crazy and knows how to use a tire iron), so the brothers better watch their backs.

The love triangle we all saw coming

Emily (Emily VanCamp) and Victoria (Madeleine Stowe) are in cahoots again, pretending to be on the same side and then secretly plotting someone else’s demise. This time it’s in both their interests for Emily and Daniel (Joshua Bowman) to get back together, which shouldn’t be too difficult since Daniel is still crazy about her. So, Emily fakes a public breakup with Aiden (Barry Sloane) to lure in Daniel. After a full episode of longing stares and shy smiles, the two finally kiss on Emily’s porch, while Aiden watches from inside.

Aiden sure didn’t look happy about it, but for the moment he has bigger issues on his plate. He just met with that evil woman from the Initiative, Helen Crowley, who told him his sister is still alive! He’s left Emily behind before to save his sister — will he do it again, especially now that Emily’s parading around town kissing other guys?

And finally there comes a major public breakthrough in the David Clarke case. Emily was able to convince the battered wife of a powerful and physically abusive judge to publicly declare that the verdict in the case came from a tainted jury. Gasps all around. The woman then dramatically removes her jacket to reveal bruises left from her husband. In that moment, she ruins her husband’s squeaky clean reputation, sparks renewed interest in the Clarke case and becomes free from her abuser. This is a rare time when Emily’s revenge isn’t only self-seeking, but the good guys get a win, too.