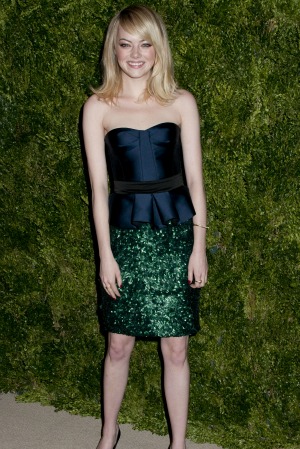 It was announced on Monday that Emma Stone will present the Oscar nominations on Thursday, Jan. 10, with this year’s Academy Award host Seth MacFarlane. In fact, this is the first time since 1972 that a show host has participated in the nominations announcement.

During the past 40 years, it has been tradition for the Academy of Motion Picture Arts and Sciences president to announce the nominees with a Hollywood actor. Last year, it was Jennifer Lawrence with then-Academy president Tom Sherak.

The Academy has been trying to take some of its traditions and give them a fresh perspective to keep up with technology and bring in younger audiences. By naming MacFarlane as the host of the 85th Academy Awards, the motion picture group hopes to generate buzz around a nontraditional host.

The Family Guy creator may seem like an odd fit, but he brings legions of fans to the table and he had a successful year in film with the movie Ted. The irreverent flick starred Mark Wahlberg and Mila Kunis as a couple whose relationship is tested when Wahlberg’s character must choose between his girlfriend or his crude and inappropriate teddy bear.

By having Stone join him at Thursday’s Oscar event, the buzz for the nominations should be big. She has one of the hottest careers in young Hollywood with movies such as The Help, The Amazing Spider-Man, and the upcoming Gangster Squad with Ryan Gosling.

Some of the films duking it out in this year’s race include Les Misérables, Lincoln, Zero Dark Thirty, and Silver Linings Playbook, but the Academy has the opportunity to nominate up to 10 films in the Best Picture category. With such a strong slate of films for 2012, it is anticipated that the voting members will take advantage of this rule.