Cougar Town has a new attitude. Less is more — or should we say — less is funnier? Creator Bill Lawrence teases an upcoming episode where the stars strip down and bare all. 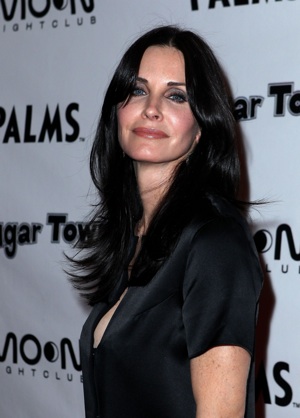 Cougar Town‘s spicing things up for cable. This month, the former ABC comedy makes the leap to TBS. To get the word out, the show’s cast and creator Bill Lawrence attended the winter Television Critics Association press tour. They gave journalists a sneak peek at the new season.

Cougar Town is filled with pop culture quirks. The characters are strange to say the least, and each episode usually has an odd theme. Even though they’re off-kilter, the writers find a way to rope them into reality.

How will they keep that going in season four? Well, newlyweds Jules (Courteney Cox) and Grayson (Josh Hopkins) want their marriage to stay fresh, so they decide to get naked.

“One day in trying to keep our marriage alive we have a naked day,” Cox says. “There happens to be only one spot in the whole house where I can stand and the light comes in at all angles; step out of it, disgusting.”

The idea for the episode was based on a real event. One of the show’s writers tried it at home with their spouse. “It was sexy for about five minutes and then it was just two middle-aged people standing around naked,” Lawrence says.

Speaking of romance, the long-developing relationship between Travis (Dan Byrd) and Laurie (Busy Philipps) will continue to build. But according to EW, don’t expect Philipps real-life pregnancy to be written into the show. Travis and Laurie aren’t moving that fast.

Are you excited for the new season?