Just when you thought the coast was clear, Snooki and JWoww are back on MTV and dishing about their future aspirations. 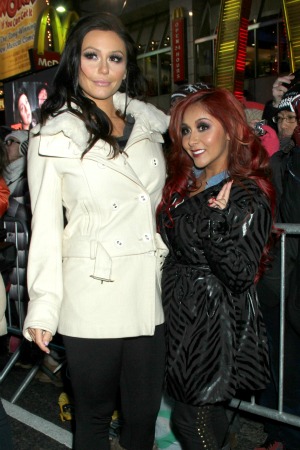 Just when you thought the whole Jersey Shore clan had cleared out of trending pop culture, they’re back. Well, at least two of the cast members are.

Nicole “Snooki” Polizzi and Jenni “JWoww” Farley will be back on MTV in less than a week for Season 2 of their reality series Snooki & JWoww. The duo gave an inside look on their Jersey Shore spin-off when they stopped by Access Hollywood Live on Friday.

The season will include the birth of Snooki’s baby Lorenzo with her fiancé, Jionni LaValle, but the scenes won’t be too graphic for viewers.

Snooki said, “[The footage of his birth will be] over the shoulder, you see some stuff.”

JWoww then chimed in with, “Never go below the curtain.”

With good advice like that, it seems that JWoww is clearly a pregnancy pro, but does she have the baby bug yet after hanging with her BFF’s baby?

Perhaps she would like to get married first, especially since she is already engaged to her bodybuilder boyfriend of two-and-a-half years, Roger Mathews?

However, there was no mention of a wedding from either reality star, but JWoww seems to have producing aspirations in her future.

I really want to get into producing,” shared the MTV star. “I want to produce TV shows.”

Her ideas for upcoming shows include a talk show for Snooki, a style show, a makeover show, and a show to help kids who are being bullied. With all of these creative ideas at hand, it seems like the duo plan on sticking around the reality show landscape for quite some time.

The Season 2 premiere of Snooki & JWoww airs on Jan. 8 on MTV.