After a series of mysterious tweets, The Real Housewives of Atlanta star NeNe Leakes finally admitted to Jimmy Fallon that she is indeed engaged to her ex-husband, Gregg. 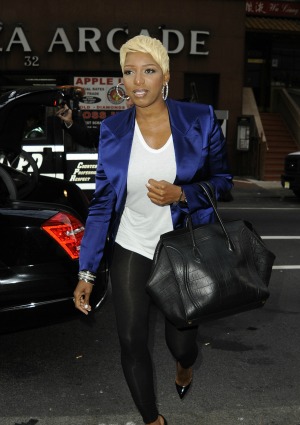 Usually we ring in the new year with something new, but The Real Housewives of Atlanta star NeNe Leakes rang in 2013 with something familiar. On Thursday night, the reality star revealed on Late Night With Jimmy Fallon that she is engaged to her ex-husband, Gregg Leakes, again.

The couple divorced in 2011 after close to 14 years of marriage. They met in 1996 and had a son, Brentt, now 13. Leakes also has a son, Bryson, 22, from a previous relationship, whom Gregg helped to raise.

The trouble in their marriage was documented in the Bravo TV series, but despite their personal problems, the couple remained close. In Season 5, Gregg seemed to still be in the picture, as he supported his ex-wife and her new venture in Hollywood with NBC’s The New Normal.

As Leakes told Us Weekly in November 2012, “You know, we’re divorced. I’m single and not looking. Love is beautiful thing and marriage is a beautiful thing. People will enjoy watching Gregg try to woo me back [during Season 5].”

It seems like all of that wooing certainly worked, because after a series of mysterious tweets and photos on New Year’s Eve, the 44-year-old finally came clean to Jimmy Fallon.

Fallon asked in their interview together, “You start tweeting out these photos. So, are you engaged? Can you say anything?”

She squirmed a bit as The Roots, Fallon’s house band, started to add a little romantic music to her response. She finally answered with “Well… a little after midnight, I was asked this beautiful question: Will you marry me—again?”

Here’s to a second chance at love. Congrats, NeNe and Gregg!