Emma Stone has experienced firsthand what many women have only dreamed of — a tussle between the sheets with Ryan Gosling! The actress recalls her “writhing” session to Glamour UK and shares how the paparazzi have invaded her brain. 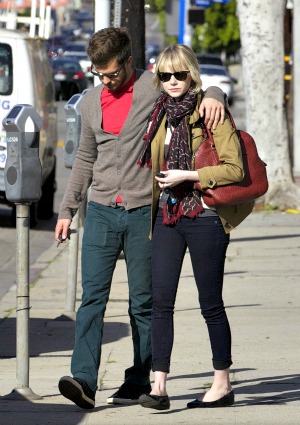 Emma Stone will never forget the day she spent “writhing” around on Ryan Gosling’s bed, even if her friends were at one point reluctant to believe it ever happened!

“My friends took me to the airport that night and when they asked me what I’d been doing all day, and I said that I’d been writhing around all over Ryan Gosling‘s bed, they were like, ‘Right! Get on that plane!’ I guess that is pretty weird to hear.”

Weird has, however, become the norm for the actress, who was caught by photog cameras out with boyfriend Andrew Garfield on Dec. 12.

“It’s weird in Los Angeles…. [Paparazzi are] hiding out everywhere,” the 24-year-old The Help actress vented. “The hardest thing is that it makes me act like an a**hole because I now have this weird level of paranoia that I never had before.”

“It feels like having a private investigator on you or something,” Stone continued. “You find yourself walking around holding your head up like you’re looking in the mirror—and your friends are wondering what’s wrong with you. Then I feel like a jerk because half the time there’s nobody there…. Still, I really don’t want to be caught with a burger all over my face.”

Does Emma Stone have a pre-fame sex tape? >>

Though life in California may have its downsides, the beauty admitted she can’t quite understand her British beau’s cultural quirks, either.

“Why is drinking such a big thing in Britain?” she pondered. “Then there’s the ‘c’ word — the ‘see you next Tuesday’ word — it’s everywhere, peppering every sentence, whereas if you say that word in America it shuts down the whole room. And of course there’s all the ‘piss-taking’ you guys do over there.”

Check out the latest issue of Glamour UK for more from Emma Stone!