Have you seen the Golden Globes promo with Tina Fey and Amy Poehler? It’s kind of amazing. 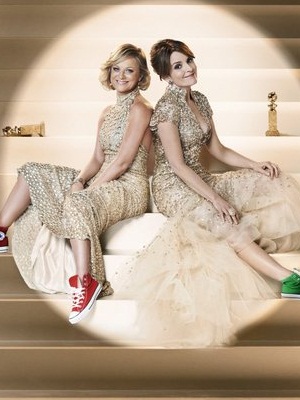 When it was made oh-so-obvious that the Golden Globes would never invite back England’s Ricky Gervais, the vast majority of viewers were disappointed. The celebs he roasted weren’t impressed, but it’s fair to say the little people appreciated his humor.

The Golden Globes is the least exciting of award shows, though, and it needed to do something to reel in the viewers. The answer: Hire two American comedians who are friends with most of the audience and would never in a million years want to offend someone in that room. So, the Golden Globes hired Amy Poehler (Parks and Recreation, SNL) and Tina Fey (30 Rock, SNL), two women who were pretty much born funny… but also kind.

And that is how Tina Fey and Amy Poehler became the hostesses of The Golden Globes… or at least how we envision it.

To help promote the awards show, NBC has released this funny new promo/interview with the ladies:

So, what do you expect from the duo when they host the awards show? Well, Poehler and Fey have a few tricks up there sleeves. For instance, they plan on rigging the awards.

“Me, as a person, winning Best Picture would be unprecedented. Especially since I didn’t really make a movie this year,” Fey says.

They seem pretty sure that since they’re hosting the show, they ought to be able to make it happen. We certainly hope they can, too.

It’ll be a bummer not to watch Ricky Gervais annoy the living daylights out of the big-named celebs in attendence, but we think our gals Amy and Tina will be just as funny!