Jennie Garth appears on this month’s cover of Health magazine, presumably to show the world how healthy she is post-Peter Facinelli split. Instead, the star comes across as obsessive, and a little sad. 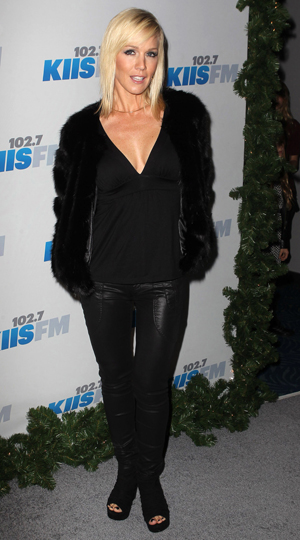 Jennie Garth‘s weight loss secret? She refuses to sit down.

The star took 30 pounds off what looked to be an already trim figure in 2012, leading celebrity watchers to label her “skeletal skinny” and “freakishly thin.”

An unrepentant Garth appears on the cover of Health magazine this month to explain how she keeps herself so skinny. She came off sounding slightly nuts.

“I’ve been working out really hard,” she said in a behind the scenes video from the Health cover shoot, courtesy of Us Weekly. “I’ve been weight training with a trainer three days a week. We do boxing, kickboxing — lots of weight lifting and training and jumping all around like crazy people. I really never sit down! I think that’s basically the secret — not sitting around.”

Not sitting around? Or never sitting down like a normal person? Which one is it, Jennie?

Garth, 40, also explained that she weighs herself daily.

“I weigh myself every morning. If I don’t, before you know it, I’ll be up 10 pounds. It creeps. This morning, it was up 2 pounds. That’s OK. But if it’s up 6 pounds? I need to make adjustments,” Garth said.

All right, that sounds relatively normal, a lot more normal than never sitting down. But Garth admitted to some strange diet plans. Chronic dieting while using a variety of diet plans is a standard warning sign of an eating disorder.

Jennie Garth dropped the “dead weight” in her life >>

“My biggest regret is putting my body through fad diets: Atkins, cleanses, the hCG diet,” Garth said. “I lost like 18 pounds, but it came right back. The worst was fasting with colonics for three or four days. It was the most horrifying experience ever!”

Obsessive weight control, particularly during times when life’s circumstances seem out of one’s control, is a fairly typical female way to express terrible pain. Are you in terrible pain, Jennie Garth? Yep.

“When I’m in excruciating pain, like with what I’ve been through with my breakup and that grief and loss that’s just immobilizing, it helps to remember that it only lasts for 13 to 15 minutes, max,” Garth told Health. “And then it’s over. Your mind is ready to go to something else. You might come back to it, but it helps to just know that that pain is not going to last forever.”

That’s true, and certainly many have been on the “breakup diet.” It’s easy to lose weight when you’re too miserable to have an appetite. But you might want to consider that “never sitting down” thing.