Rob Kardashian dissed sister Kim by telling reporters he’d get married before having a baby. But Kim and Kanye’s out-of-wedlock pregnancy is nothing new in Hollywood. 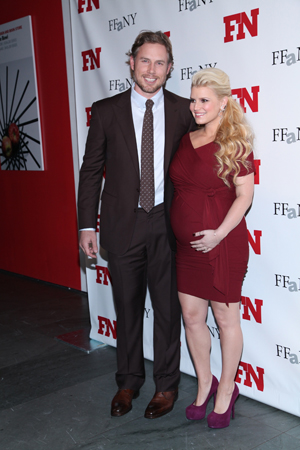 “First comes love, then comes marriage…” goes the old nursery rhyme, but Kim Kardashian and Kanye West left out that middle part before proceeding with the baby carriage.

Unconventional? Some would say so. But in Hollywood, they’re in good company.

Jessica Simpson was brought up in the strict Southern Baptist religion. The former gospel singer is engaged to fiancé Eric Johnson but has now conceived not one — but two — babies before heading down the aisle.

Suri Cruise is perhaps the most famous love child: She was born in April 2006, several months before parents Tom Cruise and Katie Holmes were married in a Scientology ceremony in Italy that November.

Though Angelina Jolie and Brad Pitt are rumored to have held a secret Christmas wedding in the Turks and Caicos Islands, they produced a passel of children first: The couple are the parents of six — both adopted and conceived the old-fashioned way.

Brooke Burke and David Charvet had two children before formalizing their relationship.

Soul singer Adele just recently had a baby with boyfriend Simon Konecki, a financier. She hasn’t yet announced the baby’s name — or any plans to wed Konecki.

Matthew McConaughey has proved himself an unconventional celebrity, particularly when it comes to marriage and kids. He and now-wife Camila Alves had two kids before marrying but managed to make it down the aisle before the third arrived in December 2012.

Sacha Baron Cohen is now married to actor Isla Fisher, but the two produced one of their two children before they wed.

Jamie Lynn Spears, Britney’s sister, is a self-professed devout Christian who met the 19-year-old father of her child at church. By age 16, she was pregnant; she and baby daddy Casey Aldridge never married.

Singer Shakira dropped the news that she was expecting a baby with fiancé and soccer star Gerard Piqué on her website back in September. She’s still pregnant. And not yet married.

And finally, Kate Hudson followed in her famous parents’ footprints by dropping baby Bingham back in 2011. Goldie Hawn and Kurt Russell never married — maybe that’s why Hudson’s in no rush to marry fiancé Matt Bellamy. She told reporters she wanted to do her second wedding “right.”

What do you think: Does it look “right” to have your kid as a member of the wedding party?