The former Los Angeles Lakers coach has asked longtime girlfriend Jeanie Buss, who is the daughter of Lakers owner Jerry Buss, to marry him. 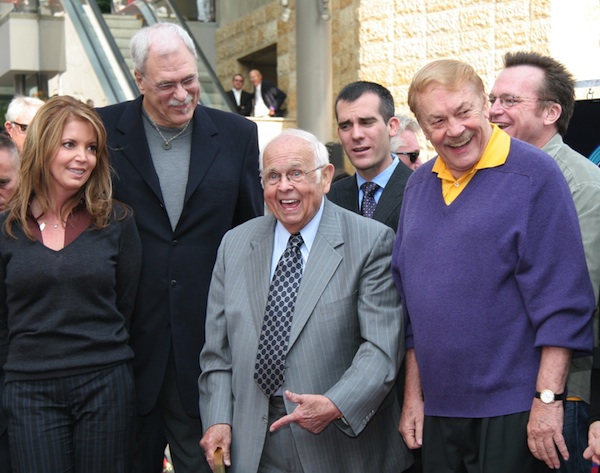 It might be a bit awkward for the Lakers family now that Jackson is technically unemployed. Jackson began his coaching career with the Lakers in 1999 after coaching the Chicago Bulls and retired in 2011.

However, he was asked to come back for the 2012-13 season — the current season — but before he reached a decision, the Lakers decided to hire former Phoenix Suns and New York Knicks coach Mike D’Antoni (the D’Antoni/Lakers deal is worth a reported $12 million).

In a curious case of events, now Jackson is in talks with the Brooklyn Nets — formerly the New Jersey Nets — to take over as head coach. What seems uncertain is how his engagement to Jeanie Buss will affect his career.

Jeanie Buss, 51, is the executive vice president of business operations for the Lakers. A graduate of USC, she posed naked for Playboy magazine in 1995 and Sports Illustrated in 1997. Jeanie, born in 1961, is 16 years younger than Jackson, who is 67.

Congratulations to Phil Jackson on his overdue engagement to Jeanie Buss!

Photo courtesy of Rachel Worth / WENN.com

15 mins ago
by Caroline Greelish