Did George Lucas just score himself a successful trophy wife or did she score him? Who wouldn’t want to marry an aging multibillionaire? 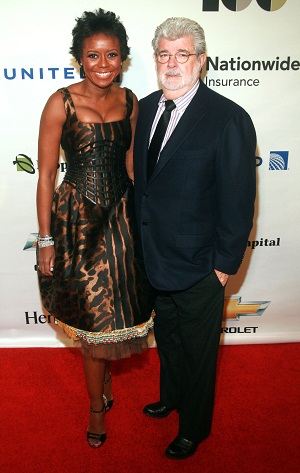 Now that George Lucas has plenty of time on his hands, he might as well get married, right? Well, that’s exactly what he plans to do, according to Lucasfilm Ltd, Lucas’ production company.

Way before hooking up with his fiancée Mellody Hobson, Lucas was married to Maria Lucas from 1969 to 1983. His ex-wife is a Hollywood legend in her own right as an Oscar-winning film editor.

He must have a thing for successful women. The director has dated the businesswoman for the past six years. No wedding date or location has been set year.

I’m sure it must be hard to plan those things when the bride is as busy as Lucas is. Hobson is the president of Chicago investment firm Ariel Investments, LLC.

She probably doesn’t need his money, but her husband-to-be is sitting on quite the payload himself. Lucas sold Lucasfilm and the Star Wars franchise to the Walt Disney Company in November 2012 for $4.05 billion. Not to mention all the money he’s earned from movies and merchandise before the sale.

Since they met so late in Lucas’ career, we can’t help but wonder if Hobson is a Star Wars fan. Will she walk down the aisle dressed as Princess Leia a la 30 Rock‘s Liz Lemon’s wedding? Will Lucas meet her dressed as Obi-wan Kenobi? (He can’t do Luke Skywalker — that’s gross. Also, Obi-wan Kenobi is much more age appropriate.) Most important, though… A little Yoda ring bearer will there be?

While that all seems unlikely, we still hope the pair go all out and wish them the very best! (Though, from the sound of things, it looks like they’ve already got that covered.)