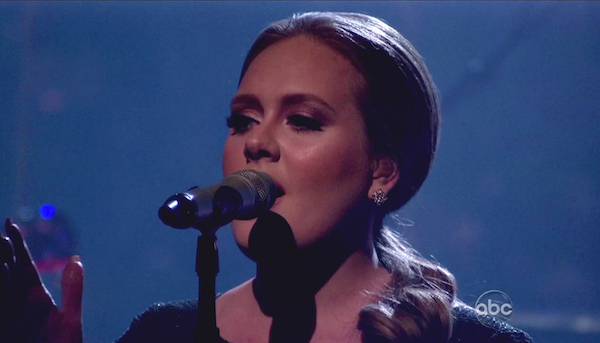 Adele makes history — again — with her album, 21. It was the highest-selling album in 2012. It was also the highest-selling album in 2011, which is the first time a recording artist’s album topped the annual list back-to-back in Nielsen history. Nielsen reports 21 sold over 4 million copies in the U.S. alone. In 2011, Adele’s 21 sold almost 6 million copies. Keith Caulfield, the associate director of charts at Billboard, spoke to Reuters and commented on just how rare Adele’s accomplishment is with 21. “It’s sort of a once-in-a-lifetime album,” said Caulfield. “Only a few of these albums come along in history.”

Adele’s 21 beat out Taylor Swift‘s fourth studio album, Red, by over a million copies: Red sold just over 3 million copies in the U.S. in 2012. Just before the end of the year Billboard reported Swift was number one in the U.S. for top album sales with Red, which sold 241,000 copies last week. Swift also has the number-two single in the country with “I Knew You Were Trouble,” which is her third single off of Red.

British boy band One Direction came in third place for their March 2012 album, Take Me Home, which sold 1.6 million copies. Coming in at number four was Mumford & Sons with their album, Babel, with 1.5 million copies sold. We should note that Adele, One Direction and Mumford & Sons are all British. Taylor Swift being the only American artist to crack the top-five list of highest-grossing album sales.

Congratulations to all of the top performers this year in music with special recognition to both Adele and Taylor Swift for their incredible accomplishments.