Nicki Minaj opens up about joining the panel of judges on Season 12 of American Idol and her feud with colleague Mariah Carey. 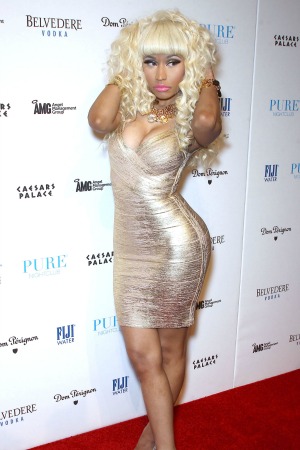 Will appearing as a judge on Season 12 of American Idol make Nicki Minaj “too famous”? That is exactly what the rap sensation is telling The Hollywood Reporter in the Jan. 11 issue’s cover story.

The 30-year-old took some time to think about whether to join the famous talent show panel and consulted many of her colleagues.

Minaj says, “I had a lot of talks with people — my family, my best friends, my label, Lil Wayne, management and then the producers.”

Her hesitation wasn’t over the opportunity itself but the hip-hop community’s reaction. She states, “Sometimes you are afraid of being too famous because it’s almost, like, is that even cool? Being that accessible, someone you see on TV every week? I never pictured myself as that type of person. I’m still surprised that I decided to do it.”

By joining the talent competition, she brings new viewers and new controversy to a series that is beginning to show its age. Early on in the audition rounds, rumors of her on-set spats with fellow judge Mariah Carey made the rounds in the press.

She doesn’t reveal much in the interview, but she does say, “Sometimes things get heated for their own reasons. I don’t think the panel has an issue.”

Her statement certainly downplays any negativity surrounding the two singing moguls, but Carey’s husband, Nick Cannon, weighed in on the dueling divas in a Dec. 11 appearance on The Howard Stern Show.

Cannon said, “It’s like they had filet mignon and doused it in ketchup…. She [Carey] feels a lot of people led her the wrong way, but I think she’s going to make the best of it.”

While that quote certainly doesn’t flatter Minaj any, it’s a sure bet the ratings will see an early spike when the show premieres on FOX on Jan. 16.