The baby isn’t even born yet, but everyone is already speculating over Kim Kardashian’s post-baby endorsements. 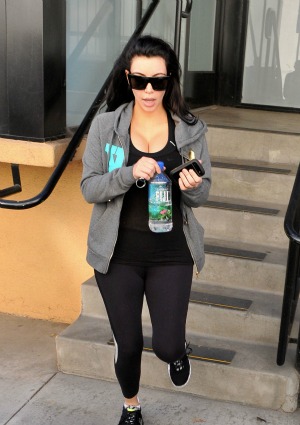 With the big holiday announcement about Kardashian’s pregnancy with hip-hop superstar Kanye West, the media is speculating what will happen post-baby. From her lengthy divorce proceedings with second husband Kris Humphries to E! announcing that the pregnancy will be a part of their reality show story lines, everyone is cashing in on the Kimye baby.

The reality show queen has been a spokesperson for QuickTrim, a weight loss drug fraught with controversy. A $5 million lawsuit was filed against the company in March 2012. While Kardashian might stick with her current weight loss company, sources are saying she would really like something more high profile.

A friend of Kardashian’s told The Huffington Post, “Kim would love to get a paid gig like Jessica, but so far no one is interested. She plans to stay healthy during her pregnancy, but even so will gain baby weight that she would love to be paid to lose.”

Clearly a $4 million paycheck like the one Jessica Simpson got is very motivating, but the Weight Watchers rep confirmed that company would be sticking with Simpson and Jennifer Hudson for the near future.

As for Jenny Craig, that company told TMZ that it is focusing on “real results for real women,” in 2013, but it would continue its alliance with American Idol judge Mariah Carey.

Even a less-known weight loss company like Medifast denied wanting any Kardashian association.

For now, Kardashian’s focus is clearly having a healthy pregnancy and baby, but when it comes to losing the baby weight, she might just have to do it the old-fashioned way: hard work.