Kim Kardashian is having Kanye’s baby — but chances are very high she will still be married to Kris Humphries when the world’s newest reality star is born. 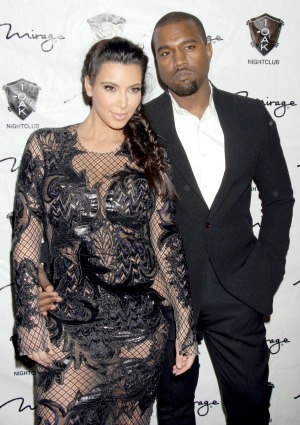 Kim Kardashian and Kanye West are having a baby — but in the eyes of the law, at least, that baby’s daddy might actually be Kris Humphries.

Kardashian’s divorce is dragging on and on because Kim refuses to accept Kris’ offer of an annulment on the grounds of fraud, believing it would destroy her brand. But in the state of California, paternity is presumed when the mother is married — so in the eyes of the law, Kris Humphries might be considered the father!

“Kim is seeing red because she is still legally married to Kris Humphries. Kim is overjoyed at the news that she is pregnant with Kanye’s baby, but she isn’t able to fully embrace it because of Kris,” a source told RadarOnline. “Kim feels that Kris is hell bent on dragging her name through the mud by prolonging the divorce proceedings.”

“Kris is holding the position that if Kim grants him an annulment on the grounds that the marriage was a sham, this whole thing ends. However, Kim won’t give in to his demands because it would damage her brand,” the insider added.

Kim is thought to be due at the end of June, and the absolute earliest a court date could be set is the middle of June, to accommodate Kris’ basketball schedule.

“Kim knows that she most likely will still be married to Kris when she gives birth to Kanye’s baby, and that absolutely sickens her,” said the source. “Kim has been pressuring her attorney, Laura Wasser, to get Humphries to sign off on the divorce, to no avail.”

But not all legal experts agree on the paternity issue.

“California law is clear that when a child is born to a married couple the presumption of fatherhood is in favor of the husband, but that assumes they are living together, cohabitating in legal terms,” David T. Pisarra, attorney and founder of Men’s Family Law, told The Huffington Post.

“Since Kim and Kris are separated the presumption of Kris as the father would not apply. I imagine that when baby Kimye is born, Kim will name Kanye as the father and he will sign a Declaration of Paternity just like thousands of other unmarried couples do to protect the rights of the baby to have both loving parents in his/her life forever.”