Former New York City firefighter Robert Linhart, who was arrested twice in 2010, was sentenced for resisting arrest outside the singer’s Manhattan apartment building. 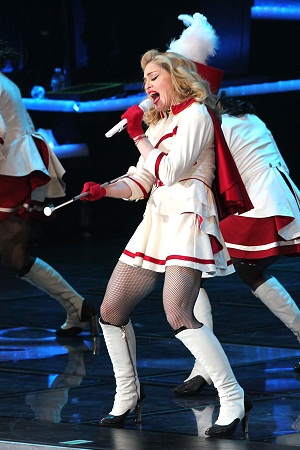 Madonna‘s latest superfan happens to be a former member of the FDNY. It’s also not his first time “stalking” the one-named pop icon.

Former firefighter Robert Linhart was arrested twice in September 2010. As a result, the man has finally been sentenced to three years’ probation. If that seems like a small punishment for stalking, that’s because it is… and he wasn’t convicted of stalking, but of resisting arrest.

The then-nearly 60-year-old Linhart had a habit of parking his SUV in front of Madge’s former Manhattan apartment. At one point, he even spray-painted love notes onto poster boards and held them up for Madonna. Police tried to arrest him, but Linhart got away. When he returned later in the month, the police managed to catch him.

So, why the light sentence?

The thing is, while parked in front of Madonna’s place, he wasn’t really doing anything illegal. It’s not a crime to adore someone. People who are arrested and convicted of stalking have usually put the celebrity in danger somehow or have done something illegal — like breaking into their house. All Linhart did was refuse to contain his love. While most people love standing nearby, swooning and waving signs for concerts only, Linhart took his love to the streets.

In other words, the only actual crime Linhart committed was resisting arrest. At least that was the judge’s decision this week when he ordered Linhart to three years’ probation and a round of anger management.

Though the sentencing seems pretty fair considering the stress he probably caused his beloved Madonna, Linhart and his attorney Lawrence LaBrew still aren’t happy. LaBrew said he’ll appeal the conviction on behalf of his client.

In Linhart’s defense: Why does he need anger management for holding up love notes?

In every else’s defense: Seriously, dude? Have you seen Madonna lately?