When the reportedly broke Lohan showed up in London this holiday season living the luxe life, watchers wondered where the cash was coming from. Now we have an answer — the Sultan of Brunei’s son Prince Azim paid her to attend his New Year’s Eve party. 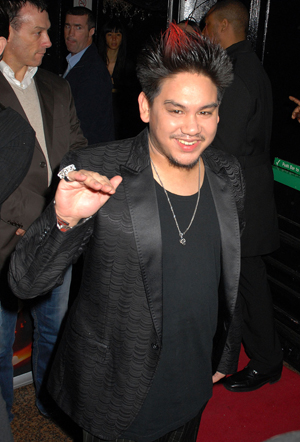 How much does it cost to ring in the new year with Lindsay Lohan? If you’re the Sultan of Brunei’s son, a cool $100,000.

The New York Daily News reports that Lohan is the latest celeb to fall under the free-spending spell of Prince Haji Abdul Azim, the son of the Sultan of Brunei who is known for his insanely lavish, celeb-attended parties.

Lohan reportedly collected a $100K pay day for attending Prince Azim’s New Year’s Eve bash, which he holds every year in the ballroom of the luxurious Hotel Dorchester in London. The prince reportedly also put Lohan up in the plush five-star hotel.

Prince Azim’s latest party is just one in a string of events held by the celebrity-obsessed prince, who threw himself a 30th birthday party in the Dorchester in June, attended by (presumably paid) celebrities such as singer Dionne Warwick, Raquel Welch, Marisa Tomei and Mariah Carey, taking a break from (ugh) “dem babies” to bring home some cash.

Yeah, since Carey supposedly spent a million bucks doing up her babies’ nurseries, she probably could use a cash infusion.

Carey has long been a Prince Azim fave, accepting from him a diamond and platinum necklace and ring worth a stunning $5.4 million in 2006. The jewelry reportedly was sent by private jet and delivered just before Carey was to perform at Madison Square Garden.

Not reported by the press: Just how the people of Brunei feel about one of their royals squandering funds on fetes. Prince Azim’s pop, the Sultan, appears to be putting up with his son’s spendthrift ways for now, but famously accused his brother, Prince Jefri Bolkiah, of misappropriating more than $14 million in state funds to pay for his own cars, jewelry, estates and a yacht, amusingly named the S.S. Tits.

The Sultan is reportedly worth $22 billion, but still.