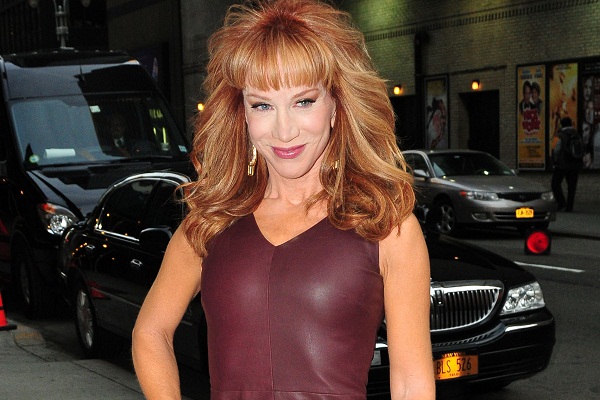 For nearly the entire episode, Griffin continued to duck down and act as if she were going to, well, service Cooper. Inappropriate enough on its own, the stunt was made even worse by the fact that no matter how uncomfortable she made the news anchor, she refused to give it up.

Now, millions of people are saying she went too far and that her antics were far from funny. Kathy Griffin, however, doesn’t care.

When she showed up on Letterman last night, everyone knew the topic would come up and that it was only a matter of time before Dave asked her.

“If you think this is the part where I’m going to apologize …” she said, “you are sorely mistaken.”

The late-night host went on to ask Griffin how she’d feel if the situation were reversed. His point, no doubt, was how uncomfortable it is to be hit on by someone you have absolutely no desire to be with. That could only be made worse when it’s repeated over and over again… on live television.

Griffin, however, chose to ignore his bigger point and address the reversal.

“If it was Anderson Cooper, myself and every other gay guy and woman, I’d unzip so fast. Hands down,” she replied.

So much was wrong about her response, it’s hard to know where to begin.

First, she may think Cooper is a dreamboat, but if someone less attractive and/or famous acted like that with her, Griffin’s reaction would have been quite different. She had to have known that, hence why she chose to ignore it.

Second, assuming that all gay men are absolutely dying to have Cooper in their pants is as stereotypical as assuming they all listen to Cher, Madonna or Lady Gaga. Griffin claims she’s buddies with gays, but her generalizing comments seem to prove otherwise.

What we all really want to know, though, is: Is she still friends with Cooper? (And we want his answer, not hers.)

52 mins ago
by Caroline Greelish