The Jimmy Kimmel Live host has long borne a grudge against his late night television counterpart, and he lets loose in Rolling Stone. 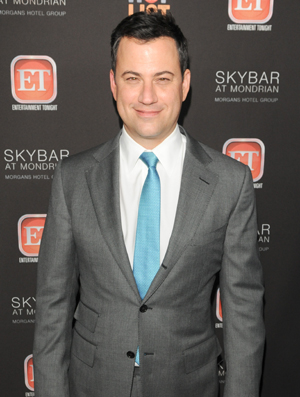 With ABC moving Jimmy Kimmel Live to 11:35 p.m. next week, host Jimmy Kimmel took the opportunity to size up his competitors in the latest Rolling Stone. Jay Leno didn’t come off well.

“As a comedian, you can’t not have disdain for what he’s done: He totally sold out,” Kimmel said about Leno. “He was a master chef who opened a Burger King.”

Kimmel has blasted Leno many times in the past, perhaps most viciously in 2010, when he put on a gray wig and a giant lumpy prosthetic chin and did a scathing impression of Leno during an entire episode of Jimmy Kimmel Live, cracking hammy jokes and mocking the kiss-up banter between Leno and sidekick Kevin Eubanks.

Soon afterward, Leno invited Kimmel as a guest on The Tonight Show with Jay Leno, and Kimmel was unreservedly nasty. Leno asked Kimmel how to do a Leno impression; Kimmel answered that it’s part Sylvester the Cat, part Curly from The Three Stooges, and part Scrappy Doo. He also noted that kids could get Leno’s Dudley Do-Right-esque chin with Silly Putty.

On that same show, Kimmel took Leno to task for his treatment of Conan O’Brien. Leno asked, “What’s the worst prank you ever pulled?” Kimmel replied, “I told a guy ‘Five years from now I’m gonna give you my show,’ and then when the five years came I gave it to him, and then I took it back almost instantly,” referring to Leno’s broken promises to O’Brien.

Kimmel also said that Leno should treat O’Brien better because “Conan and I have children. All you have to take care of is cars. We have lives to lead here. You’ve got $800 million, for God’s sake. Leave our shows alone.”

Kimmel is apparently a fan of other late-night competitors, David Letterman and Jimmy Fallon, whom Kimmel called “a worthy competitor” in Rolling Stone.

It’s no surprise that the Rolling Stone reporter gathered intimate quotes from Kimmel — Kimmel told Howard Stern on his morning talk show that the reporter literally lived with him for several days while preparing the Kimmel profile.