Someone get the Nature’s Miracle. One of Jacob’s wolf pack had an accident on the carpet. 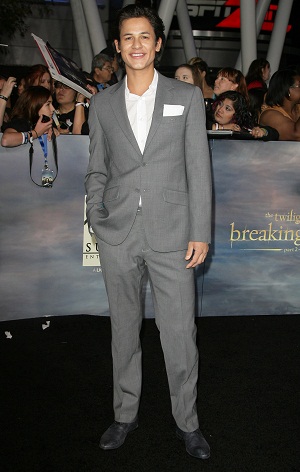 Before Christmas, Twilight star Bronson Pelletier was arrested inside LAX and charged with public intoxication.

According to witnesses, the actor, who starred in the last four movies from The Twilight Saga, was very, very drunk.

First, he was so drunk that he was kicked off his flight. Presumably, he hung around in the airport to hopefully sober up a little before trying to catch another flight.

Instead, the mildly famous actor ended up urinating on the carpet in front of other travelers.

The actor has adamantly denied that any of it was true… especially the peeing part. However, TMZ (of course) finally dug up some video of the scene. Basically, Pelletier is approached by an airport official. The disgruntled “celeb” traveler becomes so drunk, he turns around, unzips, and lets loose.

Not one for tackling (it’s not like he had a bomb), the airport worker let Pelletier continue to make his puddle until security arrived. Maybe they were just hoping he turned around before he started and were afraid if they said anything, he’d whip back around and pee on them.

Bronson Pelletier’s role was pretty minor in Twilight. He played Jared, a member of Jake’s Native American wolf pack. It was a role in a very lucrative franchise, however. He’s done more acting than just his parts on Twilight. He also starred as Jack Sinclair in a few dozen episodes of a show called Renegadepress.com. His latest acting can be seen in the upcoming movie Fishing Naked, which is in post-production.

We’re not seeing any official word on what might have caused Pelletier to get that drunk. He’s a young guy, maybe he was just partying a little too hard one time. Or is it a matter of something far more serious? Either way, while it’s slightly amusing right now, we hope he doesn’t make a habit and hope he can get his act together to continue his career.