Emmy Rossum knows all too well that being beautiful can be a curse. The actress recently explained how her good lucks nearly cost her the role of Fiona on Showtime’s Shameless. 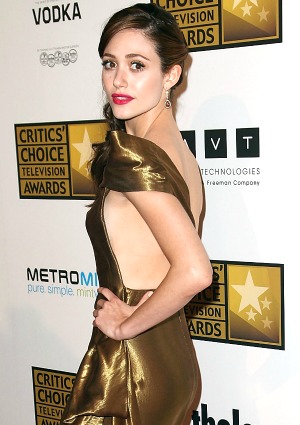 Shameless star Emmy Rossum has experienced firsthand that beauty can be both a blessing and a curse. While good looks may help open doors, they also prevent some stars from being given a chance at the nitty-gritty roles.

“They didn’t want to see me; they wouldn’t even [let me] audition,” Rossum, who is this month’s Manhattan magazine cover girl, said of begging to be given the chance to audition for the role of Fiona.

“They thought my image was too glamorous, that I couldn’t not be pretty,” the 26-year-old, seen here in June 2012, added.

Proving she’s got determination, Rossum took a new approach to auditioning to play the eldest daughter of drunken Frank Gallagher (a role that went to William H. Macy). When no one would give her an appointment to be seen in person, the young actress opted to make a tape of herself as Fiona instead — and it worked!

“They watched it and I flew out the next day,” Rossum explained. Three auditions later, she got the role, but by then was so entrenched in Fiona’s foul-mouthed ways she forgot her regular lady-like self, celebrating with a slew of four-letter words “which only seemed to confirm [the producers’] decision.”

Despite fighting hard for her Shameless role, Rossum wants to make it clear she shares little in common with her — shall we say — free-spirited character.

“Fiona is very sexually liberated. She’s also a loudmouth, and there’s safety in that,” she explained. “But I’m not the sex-on-the-first-date kind of girl.”

Do you think Showtime made the right call by casting Emmy Rossum in Shameless?