Jenni Pulos, Flipping Out reality star, is pregnant and freaking out! The newlywed, who reveals she also suffered a miscarriage, says she may still be too “immature” for motherhood. 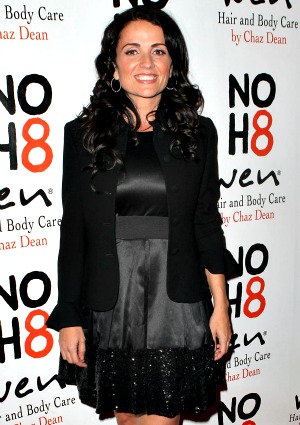 Flipping Out project manager extraordinaire Jenni Pulos is pregnant! While announcing she and new husband Jonathan Nassos are set to become parents in 2013, the reality star also admitted to having a major case of nerves.

“I am so very grateful for the best Christmas/New Year/Bday gift ever,” Pulos tweeted along with the hashtag #yesiampregnant on Wednesday.

Seen here at the NOH8 party in Hollywood on Dec. 13, the Bravo reality star looked to be sporting a tiny bit of a baby bump! She is currently 17 weeks along.

Although Pulos and Nassos, whose wedding was featured in Flipping Out‘s sixth season, are thrilled to be expecting, they know the pain of loss all too well. Pulos revealed to Us Weekly that she suffered a miscarriage a few short months after they exchanged vows.

Recalling how she felt hearing the pregnancy news from her doctor in October, Pulos said, “I didn’t think it would happen so quickly. I was open to IVF or adoption.”

No congratulatory wishes have yet been sent out from Jeff Lewis, Pulos’ boss and Flipping Out co-star, via Twitter. In December the pair made headlines when he filed a lawsuit against her over her upcoming book Hang in There, Baby — What One of the World’s Most Difficult Bosses Taught Me About Life, Work and Love.

Nonetheless, Pulos is in a celebratory mood. She tweeted late Wednesday, “Never give up on love… or baby!” #cougarscandoit!

What advice can you offer to calm the nerves of Flipping Out‘s Jenni Pulos?