This 11-year-old actor is the star of one of SheKnows TV’s newest series! 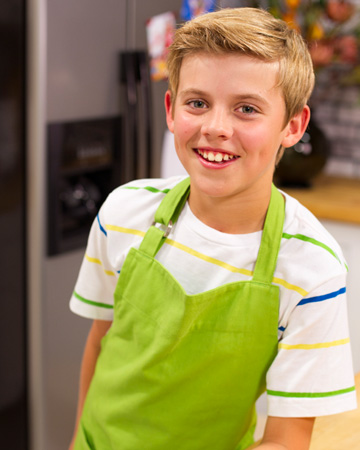 If you haven’t yet caught an episode of PB&Jake, a new web series cooking show produced by SheKnows TV, you’re missing out. Probably the best part of the series is Jake, a character played by 11-year-old actor Cameron Page.

In the series, Jake, played by Cameron, is a cooking whiz-kid who instructs the audience on how to make some of his favorite dishes. It’s not such a far stretch, because Cameron himself enjoys spending time in the kitchen.

Related story Win Your Seder with These Bubbe-Approved Passover Dishes

Even though he’s only in the fifth grade, Cameron has already built up quite a résumé for himself. He’s had roles in several musicals and plays, as well as voiceovers and played extras in many productions. Cameron has also had the lead role in an independent movie called The Next Level Starts Now.

We took a little time to sit down with Cameron and find out more about this rising star.

SheKnows: What is your favorite thing to cook for your family?

Cameron Page: Popcorn is the easiest, but I enjoy helping my mom make steak.

SK: What is your favorite ingredient to lick off your fingers?

CP: My least favorite meal is FISH. I think the smell is bad!

SK: Are you an adventurous eater?

CP: Not at all. I will try almost everything but for the most part I keep it simple.

SK: Is there any food you won’t try?

CP: Sushi, but my dad likes it and I will probably have to try it once so I can tell him I don’t like cooked fish or raw fish.

SK: If you could have a slice of pizza with a famous foodie who would it be?

CP: Chef [Gordon] Ramsey. I love watching the show and would love to eat with him — as long as he didn’t yell at me!

SK: If you could only eat one type of food for the rest of your life, what would you choose?

CP: Teriyaki Chicken from Panda Express. I do love that with steamed Rice and Noodles.

CP: Smooth, because it is easier to spread and I don’t like the crunch in peanut butter.

CP: Sweet, but the best is sweet and sour snacks.

SK: On weekends you can most likely be found doing what?

CP: On weekends I love to get up in the morning, go get doughnuts with my dad and do whatever comes next. Sometimes it’s sports and other times it is just being with my family. I love to play with my friends and swim. I could swim all day long if the water is warm!

24 mins ago
by Caroline Greelish