Jake Hamilton refused to say the N-word to Samuel L. Jackson’s face, and, well, Jackson made the rest of the interview very, very awkward. 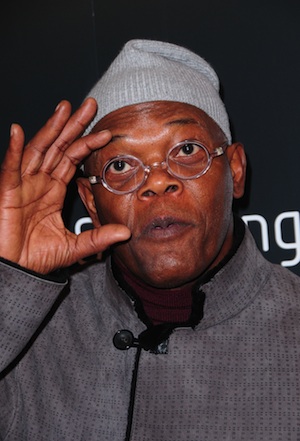 Race is an uncomfortable topic for most people, and talking about race — particularly controversial racial topics — is likely what Quentin Tarantino, director of Django Unchained, had in mind when he made the movie. Unfortunately for reporter Jake Hamilton of Houston-based Jake’s Takes, Samuel L. Jackson wasn’t about to let a white reporter get away with avoiding a certain word during their interview.

Hamilton began his questions in a seemingly routine way, but an unimpressed Jackson interrupted the reporter mid-sentence.

JH: “You know there’s been a lot of controversy surrounding the usage of the N-word in this movie and…”

SJ: “We’re not going to have this conversation unless you say it. You want to move on to another question?”

You can get the full interview below; Hamilton starts talking to Jackson around the 13:55 mark. Hamilton looks noticeably unsure and surprised at Jackson’s reaction to his avoidance of using the N-word. Jackson seems irritated at the so-called sugarcoating of the interview.

Did Samuel L. Jackson drop the F-bomb on SNL? >>

Hamilton commented today, “The most awkward moment was just seeing everyone in the room freeze, and waiting to see what my reaction was going to be.” He continued, “Whatever the video’s doing today, making the rounds, it’s not as bad as it would be if I had actually said it. The last thing that my affiliate needs is one of their reporters going around saying the N-word and broadcasting it everywhere.”

This one is a tough call, and we can see both sides of the issue. Hamilton chose to play it safe regarding the use of the N-word, and Samuel L. Jackson looks like a bit of a bully.