If Johnny Knoxville and Snooki had kids and moved to the sticks to raise them, this is how they would turn out. 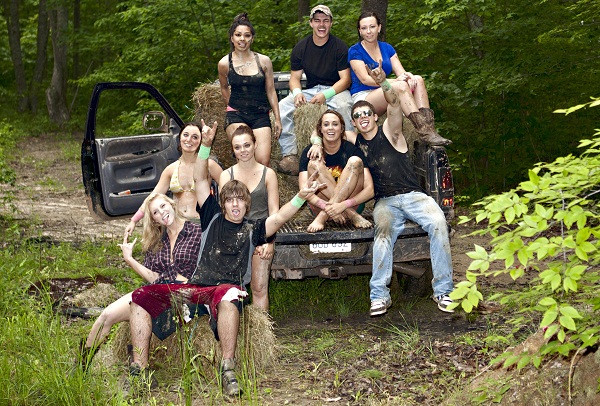 What could possibly be more disturbing than watching orange people GTL’ing on the shore of New Jersey? How about watching nine kids from the hills of West Virginia shoot things and (probably, this is just a wild guess) eventually release their spawn into this world.

And yet we’re telling you: Watch Buckwild.

Why? First, this week is still pretty slow and there’s not a whole lot else on television. Also, it looks entertaining. Finally, if nothing else, it’s insanely controversial. Check out this ABC report…

In case you were too shocked to catch it all, whatever you think you saw, your eyes probably weren’t lying. During those clips, there is mud wrestling, a kid rolling down a hill in tire, a rope swing into water, someone in a construction scoop, some sort of rocket launcher thing, and — yes — a dump truck swimming pool.

First impression: It’s a cross between Jersey Shore and Jacka**.

Under no circumstances do we reccomend letting your kids watch this, at least not until high school and then only if you truly trust them not to try any of these stunts. However, it would be a pretty entertaining way to spend an evening. If you grew up in the city or suburbs, you’ll enjoy watching how kids in rural areas live. While this show is, of course, hyped up for entertainment value, it’s still an accurate portrayal of the fun you can have without malls to wander, boardwalks to roam or concerts to attend. Kids really do drive their trucks through mud for kicks, and you know what? It’s actually really fun.

It’s terrifying to look at these handfuls of lifelong friends, see their lack of ambition and know that in a few short years they’ll be responsible for their own children. However, it’s also hilarious watching them try to entertain themselves in the meantime.