A Los Angeles area photographer, Chris Guerra, was killed yesterday while attempting to snap pictures of Justin Bieber during a traffic stop. 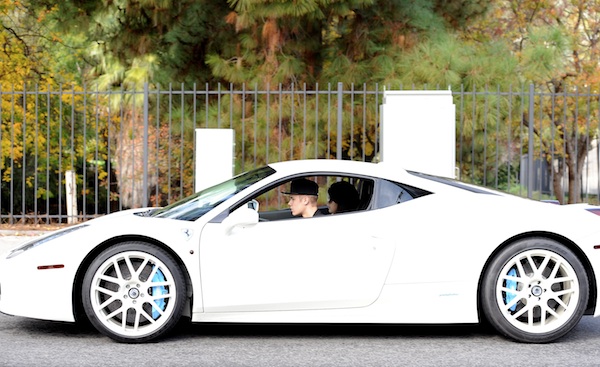 Even though Justin Bieber was not in the car Tuesday afternoon, Los Angeles paparazzo Chris Guerra possibly thought he was when Guerra tailed Bieber’s brand-new white 458 Italia Ferrari (seen above in a photo taken last week). According to TMZ, Guerra exclusively followed Bieber for several months and was following what he probably assumed was Justin Bieber yesterday when he was killed.

Los Angeles police are investigating the incident, and while alcohol does not appear to be a factor in Guerra’s death, the paparazzo is suspected of having smoked marijuana earlier in the day. TMZ says it has a source who spoke to Chris Guerra around 5:15 p.m — about an hour before he was killed — who says Guerra was smoking.

Justin Bieber was not driving the vehicle; friend and rapper Lil Twist was behind the wheel during this horrific incident. Bieber released a statement regarding the paparazzo’s death, extending his deepest condolences to Guerra and his family.

“While I was not present nor directly involved with this tragic accident, my thoughts and prayers are with the family of the victim. Hopefully this tragedy will finally inspire meaningful legislation and whatever other necessary steps to protect the lives and safety of celebrities, police officers, innocent public bystanders, and the photographers themselves.”

“It’s unfair for anyone to put this on to Justin’s conscious as well! Your mom teaches u when your a child not to play in the street! The chaos that comes with the paparazzi acting like fools makes it impossible for anyone to make safe choices.”

Chris Guerra was in his late 20s and single and had no kids. Our thoughts and prayers go out to his family and hope progressive change can be made to protect public figures and photographers in the future.