Lindsay Lohan is broke — so broke that she’s selling off old clothing, endorsing energy drinks and even accepting handouts from Charlie Sheen. So who’s paying for her high-profile holiday trip to London? 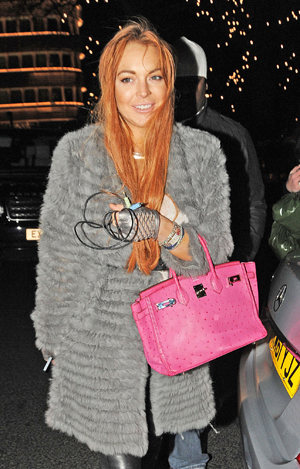 Recent images of Lindsay Lohan gallivanting in London have gossip fans wondering who’s paying for her to go abroad.

Reports have surfaced over the last few months that La Lohan is dead broke — so much so that she worried about paying the rent on her Beverly Hills mansion and sent sister Ali to sell off her old clothes at a consignment store to obtain ready cash. She was even threatened with having items from a storage locker auctioned off after she couldn’t pay a $16,000 bill levied by the storage unit company.

Nonetheless, the troubled starlet somehow found the funds to fly to London to visit with family and friends (and, possibly, to see crush Max George perform with his band The Wanted).

Even a coach flight from Los Angeles to London is at least $500. And do you really think Lohan flew coach?

A sad and broke Lindsay Lohan on Million Dollar Decorators >>

It’s also been reported that Lindsay stayed with family members at London’s Dorchester Hotel, where rooms run upward of $750 a night. Do we also suppose that Lohan settled for the hotel’s cheapest rooms? Even if she did, that’s a solid couple of grand for a few nights’ lodging.

On her London trip, Lohan was also photographed shopping at upscale British department store Harrods (where one can buy Alexander McQueen scarves for about $400) and dining at exclusive restaurant C London (where diners spend $150 and up for dinner).

All this begs the question: Where does a broke starlet find a sugar daddy to pay for this holiday revelry?